Bolt’s thank you came hours after he won his final 100-meters on home soil in Kingston before a massive crowd of some 30,000 people including the country’s prime minister.

The triple Olympian won the JN Racers Grand Prix 100-m race, labeled “Tribute to a Legend,” in a time of 10.03 even as he publicly admitted to being nervous before the race.

“The run, it was just OK. I don’t think I’ve ever been that nervous running a 100m,” Bolt said after a lap of honor before the packed stadium of adoring fans. 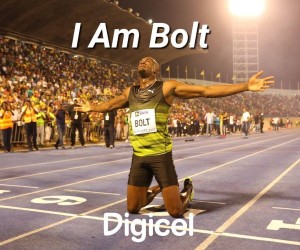 He also called it “possibly one of my worst races.”

“My execution was poor, my start was poor as always. I think in the last bit I lost it a little,” he added.

Running from lane five, Bolt took control of the race before the halfway mark and pulled away to the delight of the huge crowd.

Following the race, the skies above the stadium lit up with a fireworks display.

Bolt, 30, now says he plans to end his career at the world championships in London in August.

For his part Jamaica’s PM Andrew Holness tweeted: “Saluting a legend. Thank you (at)usainbolt for all you have done for the sport of athletics and Jamaica.”

While Digicel posted a photo of Bolt winning the race with the hashtag, #Chiefspeedofficer.