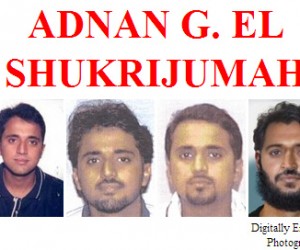 News Americas, NEW YORK, NY, Thurs. Sept. 11, 2014: It’s been exactly 13 years to the day since terrorists crashed two airliners into the World Trade Center twin towers in New York City, killing almost 3,000, including several from the Caribbean. And it’s been over four years since the U.S. government has indicted a man with a Caribbean passport as a terrorist but has come no closer to locating him.

Adnan G. El Shukrijumah remains on the lam since he was indicted in the Eastern District of New York in July of 2010 for his alleged role in a terrorist plot to attack targets in the United States and the United Kingdom.

The charges revealed that the plot against New York City’s subway system, uncovered in September of 2009, was directed by senior Al-Qaeda leadership in Pakistan and was also directly related to a scheme by Al-Qaeda plotters in Pakistan to use Western operatives to attack a target in the United States.

Shukrijumah, 39, who was born in Saudi Arabia but carries a Guyana passport, is thought to have served as one of the leaders of Al-Qaeda’s external operations program.

So how did he get to obtain a Guyanese passport? Shukrijumah’s dad, the late Sheikh Gulshair, who passed away in 2004, was born in Georgetown Guyana and was an imam at a mosque there after returning from theological studies in Saudi Arabia in the 1960s.

He reportedly moved his wife Zurah Adbu Ahmed and his family, including, Shukrijumah, from Saudi Arabia in 1995 after a stopover in Brooklyn.

Shukrijumah spent part of his youth in Brooklyn and learned English later in his youth. He went on to live in Miramar Florida where he attended Broward Community College and as a young adult in 1997, he participated in an “English as a Second Language” class.

Shukrijumah studied chemistry and computer sciences at BCC, working at a Motorola plant and as a used car salesman. In the late 1990s, U.S. authorities believe that he may have been trained at an Afghan training camp.

In March 2001, while investigating Imran Mandhai, who attended the same Florida mosque as Shukrijumah, authorities made a note that Mandhai had eyed Shukrijumah as a potential colleague in whom to confide his plans, although Shukrijumah had refused to associate with the militant Mandhai. Reports would later accuse Mandhai of plotting to destroy Mount Rushmore.

Shukrijumah left the United States in May 2001 after receiving his degree in computer engineering and flew to Guyana before entering Trinidad using Guyana passport #A041472141, issued in the United States.

However Imran Mandhai’s testimony in court would indicate that he believed he had last seen Shukrijumah two months after his stated departure. Mandhai visited Dar Uloom almost every day for two years, where he met two undercover FBI agents and recruited Jokhan to help with their plot to blow up targets in Pembroke Pines.

Iman Mandhai told an undercover FBI informant that another man who frequented the mosque, Adnan El-Shukrijumah, was a possible choice of about 25-30 potential individuals who could be trained for bin Laden’s future assignments in South Florida.

Authorities tried to speak with Shukrijumah, turning up at his parents’ home six times asking if he was available – only to be told that he had left the country for Trinidad (by way of Panama). to pursue an opportunity selling shoes wholesale.

Under torture, Jose Padilla claims to have been partnered with Shukrijumah in the summer of 2001, and that the pair was taught how to seal natural gas into apartment complexes and detonate explosions in a course they received at the Kandahar airport. Padilla claims that the two men constantly fought, and he eventually went to Mohammed Atef to complain that he could not work with Shukrijumah and the training was canceled.

In late 2002, Shukrijumah phoned his parents to tell them that he had found a wife, settled down and had a son, and was now teaching English in Morocco.

Shukrijumah, who also goes by the aliases, Adnan G. El Shukri Jumah, Abu Arif, Ja’far Al-Tayar, Jaffar Al-Tayyar, Jafar Tayar, Jaafar Al-Tayyar, Hamad, has managed to elude authorities since Khalid Sheikh Mohammed first fingered him as a terrorist operative under interrogation in 2003. Sightings have been reported in the U.S. and Central America — Subway sandwich shops in both nations, specifically — but his whereabouts remain unknown.

The FBI believes he may now wear a beard.

In March 2004, Shukrijumah was seen at an Al Qaeda summit in Waziristan. One attendee at the 2004 meeting,  had footage of potential targets in Washington, DC and New York, including the New York financial district, the World Bank and the IMF.

A reward of up to $5 million is being offer for information leading directly to the capture of Shukrijumah, who should be considered armed and dangerous.

Anyone with information is urged to contact their local FBI office or the nearest American Embassy or Consulate.