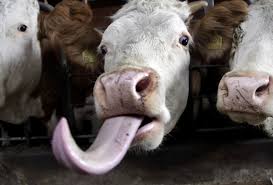 News Americas, NEW YORK, NY, Weds. July 27, 2016: Just when you thought you had heard some weird news, it just got weirder in Fair Grove, Missouri.

A 68-year-old man there has been charged with unlawful sex with an animal after he was allegedly caught in the act of trying to have sex with a cow.

Deputies in Fair Grove say a female resident walked into her barn last month and found Darrell Helton trying to have sex with her cow.

As the woman entered the barn she saw a naked man — identified as Helton — standing behind one of her cows apparently having sex with the animal, according to a statement.

Helton allegedly told deputies with the Greene County Sheriff’s Office that he went to the property in Fair Grove, caught a cow, tied it to the corral and tried to have sex with the animal.

The statement says Helton told authorities that it was the second time he had engaged in sexual acts with a cow on that property.

Unlawful sex with an animal is a Class A Misdemeanor punishable by up to one year behind bars.

The Bible Explained: All the Verses of Revelation Are Connected to the Reality of Our Times – Shincheonji Church