News Americas, NEW YORK, NY, Mon. Aug. 31, 2015: Pope Francis has been known to make waves for his frankness since becoming the head of the Catholic Church in 2013. As the countdown begins to the arrival of Pope Francis on September 22, the Vatican’s ambassador to the U.S. is giving some insight into what the Pope could focus on.

Ambassador Kenneth Hackett told the Associated Press that said the Argentine-born Pope’s message will be about immigration.

“I think he’ll call us to continue to engage with it (the world), don’t throw any walls up around our nation, don’t revert to isolationism,” the AP quoted Hackett as saying. “We are a nation of welcoming people, so that’s where I think he will put his attention.”

The Pope’s message could be a slap in the face to the GOP and its leading presidential contender Donald Trump who has called for a border fence between Mexico and the United States and the deportation of millions of illegal immigrants.

In addition to immigration, Hackett told the AP that Pope Francis will likely wish to discuss income inequality, family issues and the environment while he is in the country.

The Pope’s official US schedule is as follows:

4pm: Pope Francis arrives in D.C. at Joint Base Andrews at 4 p.m.

4:15 p.m: Junipero Serra Canonization Mass at the Basilica of the National Shrine of the Immaculate Conception

9:20 a.m: Speech to the Senate and House of Representatives (Joint Session of Congress)

11:15 a.m:  Visit to St. Patrick’s Catholic Church in D.C. and Catholic Charities of the Archdiocese of Washington

4 p.m: Departure for New York from Joint Base Andrews (D.C.)

4 p.m. Visit to Our Lady Queen of Angels School in East Harlem

10:30 a.m Mass at Cathedral Basilica of Sts. Peter and Paul

7:30 p.m Visit to Festival of Families at Benjamin Franklin Parkway and Prayer Vigil with World Meeting of Families

7 p.m.  Visit with organizers, volunteers and benefactors of the World Meeting of Families at Atlantic Aviation

8 p.m Departure for return to Rome 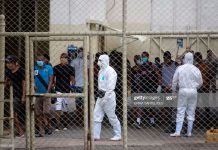 This Caribbean Country Has More Than 2,000 Confirmed Cases Of Coronavirus 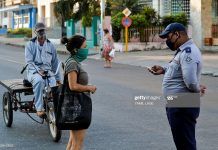 Cubans Cast Aside Coronavirus Fears In Search For Food

Will the UK let China Edge it out of the Latin American market? –...