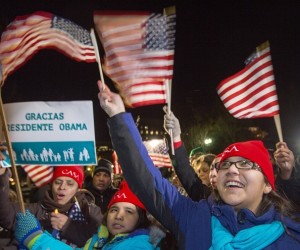 News Americas, NEW YORK, NY, Tues. Dec. 2, 2014: In the early hours of Monday morning, Dec. 1, I appeared on the Tony Cobb radio show on 93.5 FM to chat about the details of the recent immigration changes following the executive action of President Barack Obama on Nov. 20th. It was disconcerting to hear fellow guest Ras Clem, a Caribbean radio personality on the same station as Cobb, note that there have been several instances since the announcement when he has heard attorneys on Caribbean radio programs urging their mainly immigrant listeners to “come in and get the ball rolling” if they are undocumented.

It is talk like this that resulted in the U.S. Citizenship & Immigration Services releasing a bold statement last week advising immigrants about scams. As the U.S. CIS pointed out: “While many of these unauthorized practitioners mean well, all too many of them are out to rip you off. This is against the law and may be considered an immigration services scam.”

The reality is that there are only a limited number of undocumented immigrants who will benefit from the executive action taken by President Obama this past November.

They are as follows:

1: Undocumented immigrants who were born on or before June 15, 1981and have been living in the U.S. uninterruptedly since January 1, 2010. Under the program known as DACA (Deferred Action for Childhood Arrivals, these migrants will be allowed employment authorization for three years and will also be allowed temporary travel documents.

2: Undocumented parents who gave birth to a child or children in the U.S. on or before November 20, 2014 and have been living in the U.S. continuously since January 1, 2010. They will be given a temporary reprieve under this order that will allow them to get a work permit and travel documents. If they have a child who is a green card holder, then they will also be eligible under the President’s latest waiver.

3: If you are the undocumented son or daughter of a U.S. citizen or the spouse or sons or daughters of lawful permanent residents who have resided unlawfully in the United States for at least 180 days then you will also be eligible for a visa to get a temporary reprieve under this executive action.

4: Foreign investors, researchers, inventors and skilled foreign workers will also benefit from the President’s order. According to the U.S. CIS, “parole on a case-by-case basis will be granted to eligible inventors, researchers and founders of start-up enterprises who may not yet qualify for a national interest waiver, but who have been awarded substantial U.S. investor financing; or otherwise hold the promise of innovation and job creation through the development of new technologies or the pursuit of cutting-edge research.”

Additionally, work authorization will be provided to the spouses of certain H-1B visa holders who are on the path to lawful permanent residency or green card holder status.

No other undocumented immigrant will be able to benefit at this time, unless of course they fall in love and get married. Others with applications in the system including through sibling sponsorship or company sponsorship, will simply have to wait the 10-year period until a visa become available – unless by a miracle, the U.S. Congress changes the laws for the better.

Most important to note right now, the U.S. CIS is not accepting applications for any of these categories and it could be another 90 days at least before that happens. There is no need to do anything right now except to ensure you are eligible and your documentation is in place. This includes proof of relationship such as birth certificates and proof of continuous presence such as receipts of bills or past tax returns.

For more log on to uscis.gov/immigrationaction and ensure you educate yourself on the rules of this new order to avoid falling prey to scam artists.