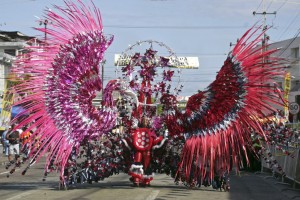 News Americas, NEW YORK, NY, Fri. June 23, 2017:  It’s finally summer in the US, UK and Canada and for many Caribbean nationals and fans of Caribbean culture, that means one things – it’s time to break out and party – carnival style that is! Here are 10 Caribbean carnivals set for across the US, Canada and the UK you should know of and check out this summer:

If you are in Charleston, South Carolina or any neighboring areas, be sure to check out the Charleston Carifest. This year the spotlight is on Haiti. The parade is set for tomorrow, June 24, 2017 from the Charleston Museum at Meeting and John streets downtown, Charleston and will end at the Carnival Village at Brittlebank Park. This event will feature Caribbean food, costumes, games, vendors, a kiddie zone and dancing, with live music from reggae, soca (calypso), dancehall artists and a performance from the Haitian Children’s Choir. For more see here

The Caribbean American Connection of Fayetteville, North Carolina will host its seventh annual Caribbean Festival in Festival Park this Sunday, June 25th, from noon to 8 p.m. It will feature Caribbean food and music as well as a Parade of Nations at 5:30 p.m. on the main stage in the Park. For more information, call (910) 261-6910.

The 36th annual Baltimore Caribbean Carnival parade and festival returns to Lake Clifton Park on Saturday, July 15, 2017. The 1 ½-mile parade on Saturday, July 15th will feature a stream of floats, eye-catching costumes and hip-swaying sounds of soca music and will get underway at 900 E 33rd Street, Baltimore MD 21218. 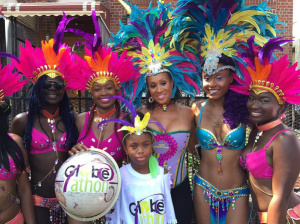 The newly rebranded Toronto Caribbean Carnival, formerly Caribana,  will have a month-long run this year, beginning on July 7th and counting down to August 6, 2017 in downtown Toronto.The Grand Parade along the Toronto waterfront is set for August 5th, along the length of the Exhibition Place before entering Lakeshore Boulevard. It will feature masqueraders in colorful and striking costumes and steel pan bands. For more on the month-long run-up see here.

The Annual Jacksonville Caribbean Carnival returns to Jacksonville, Fl. on Saturday, August 12, 2017. The festive parade begins at 1:00p.m., from the corner of 1st Street & A. Phillip Randolph Boulevard, then proceeds to the Food, Craft and Music Festival at Metropolitan Park 2, 1410 Gator Bowl Blvd, Jacksonville, FL 32202. Get more information here.

The 6th Annual CaribMask Carnival Parade and Festival Village returns to Raleigh, N.C. on August 26, 2017. The event will feature the Parade of Bands and a Festival Village showcasing Caribbean music, art and crafts and Caribbean food. For more see here.

The annual Boston Carnival, founded in 1973 by Trinidad-national Ken Bonaparte Mitchell, returns with an annual parade at MLK Boulevard, Roxbury, MA on August 26, 2017. Parade start time is noon and for more see here.

Join Europe’s biggest street party as the Notting Hill Carnival fills the streets of West London with Caribbean colors, music and flavors. The grand parade is set for August 28, 2017 from 10 a.m. in the Notting Hill area. For more on the carnival see here.

The West Indian American Day Carnival turns 50 this year. The four days of Caribbean Arts& Culture gets underway at the Brooklyn Museum Grounds in Brooklyn, NY, from August 31st to Sept 3rd, 2017. The annual parade featuring costumed bands and revelers along Eastern Parkway in Brooklyn, NY is set for Sept. 4, 2017 from 11 a.m. For more see here.