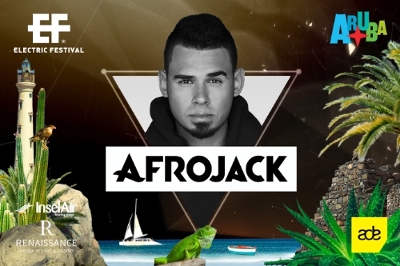 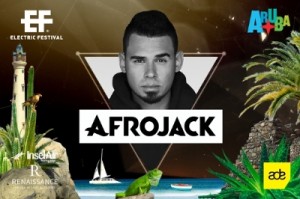 ORANJESTAD, Aruba, July 30, 2015 /PRNewswire/ — The rumors are true! Nick Leonardus van de Wall, commonly known by his stage name Afrojack, is set to perform at the third edition of Electric Festival amongst NERVO and Loco Dice Labor Day weekend. The DJ and producer performs at the main stage at the APA Arena in Oranjestad, Aruba.

The Twins Maurice and Karim Neme, Entrepreneurs and Founder of Electric Festival, are proud to organize the third edition in conjunction with the Aruba Tourism Authority and Amsterdam Dance Event.

From Thursday, Sept. 3rd to Sunday, Sept. 6th, Aruba opens its gates for the electronic music industry and showcases for the world. The four day event will feature top international DJs as well as ADE Global Sessions. Tickets and travel packages are available at https://www.electricfestival.com/tickets.

Grammy award winning DJ and producer, Afrojack, is one of the most influential names in electronic dance music today. At only 27, he has played a large role in the worldwide explosion and popularity of dance music with The Hollywood Reporter calling him “a global icon” set “to conquer the world” and in 2014, Forbes placed him at #6 on its annual list of ‘The World’s Highest Paid DJs.’ A talented producer and artist, Afrojack is versatile and creative with his sound whether creating club hits or producing and remixing for the likes of Beyonce, Pitbull or Madonna. Afrojack is adept at shifting between genres and playing with his sound and it’s easy to see why his skills are some of the most sought after in the world. Nick also won an EBBA Award (a BUMA Initiative) in his home country, the Netherlands.

Given Afrojack’s immense popularity and influence on the music industry it is no surprise that many corporate brands have flocked to him for brand partnerships. Afrojack recently announced a partnership with globally celebrated fashion label ‘G-Star Raw’ for his own line of Afrojack inspired designs sold worldwide. He recently released his second capsule collection with the brand, after his first collection sold out in only 48 hours. He was also sought out by leading gaming company, Razer, to be a brand consultant on the development of its future products. Further, Nick’s single, ‘Ten Feet Tall,’ premiered as a part of Bud Light’s newest commercial during the 2014 Superbowl. He continues to collaborate with some of the world’s most legendary music artists, including his most recent appearance on “Good Morning America” with world renowned music artist Sting.

Afrojack has built a global brand that is recognized for influencing attitudes and championing new levels of change for the music world. It is clear from his exponential growth that there is no stopping him and at only 27 years old, this is just the beginning; now he touches Electric Festival for the very first time.

Visitors in previous years came not only from neighboring ABC Islands, a strong following from the U.S., Venezuela, and Europe emerged.

The program of ADE Global Sessions Aruba focuses on the exploding electronic dance music market in the Latin American and Caribbean region. Exclusive business gatherings include an interactive series of powerful talks on the rise of electronic music festivals in the region with Leizer Guss (OCESA/EDC Mexico), Rodrigo Frutos (The Bullitt Agency) and Edo van Duijn (SFX South America) and Industry Inside: Spot on Latin America, with Brandon Bakshi (BMI) talking to Luis Estrada (Aftercluv Dancelab/Universal Music Latin Entertainment) about industry trends, sounds, possibilities and future visions for electronic dance music in and from the Latin American region.

With a diverse program that offers opportunities for a new generation, Aruba wants to get back in the driver’s seat and be the number one destination amongst millennials and attract not only with its flamingos, crystal clear waters and sandy beaches.