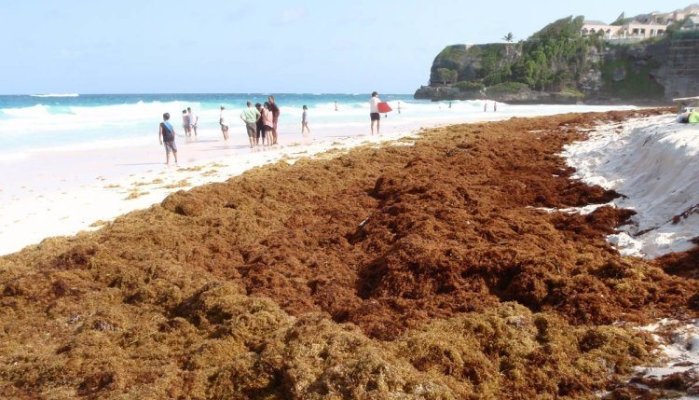 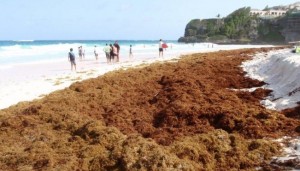 News Americas, LONDON, England, Fri. July 31, 2015:  From the Dominican Republic to Barbados, countries across the Caribbean are struggling to deal with the unusually large amounts of Sargassum seaweed that are being washed up on many beaches.

Although the strong-smelling rotting seaweed arrives most years in many countries, the volume this year – reportedly up to three to four feet high in some locations – is so great that normal voluntary efforts to clean beaches are proving ineffective on many coastlines. The problem for the tourism sector and for local fishermen is that the unsightly piles of seaweed and the difficulty of its removal could begin to have longer term negative economic consequences.

Although there are no reports of visitor cancellations, the hospitality industry across the region is concerned about the seaweed’s unsightly appearance, visitor complaints, the cost of mechanical removal, and the possibility of reputational damage. The seaweed’s arrival also coincides with the start of the season when many European visitors arrive in the Eastern Caribbean. Fisherman too are worried. There are reports in some countries that the seaweed has led to diminished catches and a fall in their earnings. There is also some anecdotal evidence of investors questioning the long term cost implications in relation to projects they are engaged in. As the name implies, the Sargassum seaweed comes from the Sargasso Sea.

This is an ecologically important warm water area located in the mid-Atlantic where traditionally masses of seaweed have been encountered. Much less clear is why the quantity has been so bad and so widespread this year and exactly what can be done. The University of the West Indies and other regional and international bodies have been exploring whether there are nutritional uses for the seaweed if processed, issues related to the danger of ecological damage to beaches if heavy mechanical equipment is used to remove it, and the reasons for such large quantities appearing this year; but there are no easy or rapid answers.

To complicate matters the seaweed may have ecological advantages for beaches and its removal can damage wildlife habitats. There are also issues of cost and who pays for any clean up. Significantly, no one knows whether this is a one-off problem this year or will become a recurring longer term challenge. One alternative but costly solution being considered in the Dominican Republic, where Sargassum seaweed is being washed up on its eastern coastline and where there is the greatest number of beach resorts in the country, is the installation of barriers. These, it is suggested, might keep the seaweed from reaching the shore in a manner that will result in the ocean currents then carrying the seaweed back out to sea.

Speaking recently about how best to address the issue, Barbados’ Minister of Tourism, Richard Sealy, who is also the Chairman of the Caribbean Tourism Organisation (CTO), said that there was no quick fix. His country’s Coastal Zone Management Unit, he said, had advised that the problem was not going to go away in the near future and called for a coherent response to the challenge it posed.

For Barbados, Mr. Sealy said, it was not a seasonal or specific beach problem anymore, but “was affecting the entire island.” He suggested that what was needed was a regional effort to deal with the problem. “There is no real regional [effort]; nothing coordinated is happening at that level. Barbados is pretty far advanced… but it is important that we have some level of coordination regionally as well,” he said. He has a good point. Here is an issue of importance to the whole Caribbean tourism economy that requires long term regional thinking and detailed exploration in a way that involves all Governments, the industry, fisherfolk representatives and scientists.