An Argentine prosecutor found dead shortly before he was about to make explosive allegations about President Cristina Kirchner took a bullet point-blank to his forehead, justice officials said Saturday. Authorities said Diego Lagomarsino, a computer expert and colleague who said he had brought prosecutor Alberto Nisman a handgun Saturday night at his request, has been barred from leaving Argentina. Nisman was found dead with a bullet to the head in his Buenos Aires home on Sunday, just before he was set to go before a congressional hearing to accuse Kirchner and Foreign Minister Hector Timerman of shielding Iranian officials implicated in the 1994 bombing of a Jewish community center that killed 85 people. It was Argentina’s worst terror attack in modern history. 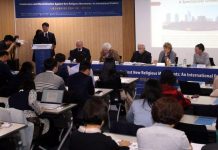 Hey GOP, here’s how to win the immigration battle in 3 simple steps –...

Rios Montt: From army to dictatorship to courtroom