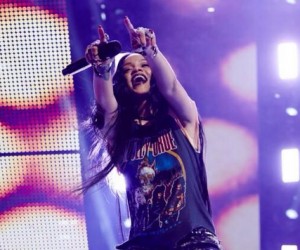 News Americas, NEW YORK, NY, Weds. Sept. 17, 2014: Bajan singer Rihanna is known for her expletives and using Twitter to make her emotions known. But this time the singer’s words may be costing her.

CBS yesterday announced it had parted ways with Rihanna following her Tweet: “CBS you pulled my song last week, now you wanna slide it back in this Thursday? NO, [f….] you! Y’all are sad for penalizing me for this.”

The company, according to the AP, said they are “moving in a different direction” with the show’s theme music. CBS senior VP of communications Jen Sabatelle said in a statement: “Beginning this Thursday, we will be moving in a different direction with some elements of our Thursday Night Football open. We will be using our newly created Thursday Night Football theme music to open our game broadcast.”

Rihanna’s “Run This Town” was pulled as the opening song from “Thursday Night Football” last week just days after the ugly Ray Rice elevator assault video was posted to TMZ.

However, Roc Nation said it was the one who revoked CBS’ license to use “Run This Town” for its Thursday Night Football package because of the network’s “misuse and misrepresentation of Rihanna’s name and participation in connection to the Thursday football package,” among other offenses.