Home Caribbean Barbados Caribbean And Latin America News Round Up For Wednesday Jan. 4, 2017 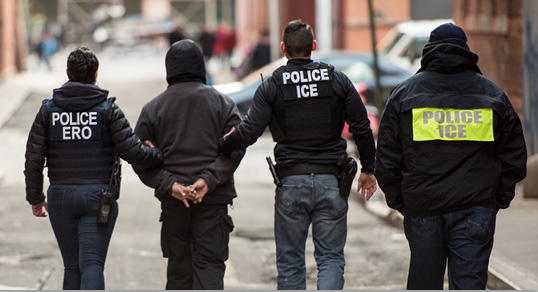 The U.S. Department of Homeland Security’s US Immigration and Enforcement Agency says it removed a total of 240,255 immigrants from the country in fiscal year 2016, a two percent increase over FY 2015. The leading countries of origin for removals were all Latin American – Mexico, Guatemala, Honduras, and El Salvador. Almost 2,000 immigrants were sent back to  the Dominican Republic and 787 to Jamaica in FY 2016.

Jamaican Roots Senator Kamala Harris was on Tuesday sworn into office as only the first African-American senator in the state of California’s history. Harris was among seven new members of the Senate who joined those who won re-election in receiving the oath of office from Vice President Joe Biden Tuesday afternoon. Harris, who was the state’s attorney general, is the daughter of immigrants from India and Jamaica. In addition to becoming California’s first African-American senator, she is also the first Indian-American, the first biracial woman and the second African-American to serve in the U.S. Senate.

An Alaska Airlines plane will take off from Seattle-Tacoma International Airport off for Cuba tomorrow, Thursday Jan. 5th. This historical flight will head to Los Angeles before it goes non-stop to Havana, and will, according to Alaska Airlines, be the first commercial West Coast flight to Cuba. It marks the start of Seattle-based Alaska Airlines’ daily non-stop service to the island nation. The announcement comes as PriceWaterhouseCoopers LLP (PwC), tour operator members of the United States Tour Operators Association (USTOA), named Cuba the most popular or “hot” destination for travelers in 2017.

Haitian businessman Jovenel Moise has been officially declared winner of November’s presidential election. Moise, a 48-year-old banana exporter, was elected with 55.6 percent of the vote, well ahead of his closest rival, an electoral tribunal confirmed. Officials dismissed allegations of fraud even as some protesters marched in the capital, Port-au-Prince. Moise is expected to take office by February 7th. The US State Department, in a statement said: “We congratulate President-elect Jovenel Moïse on his first-round victory and look forward to working closely with him as we strengthen our longstanding partnership with Haiti. We urge all actors to accept the final results, refrain from violence, and work together to build a stable and prosperous Haiti.”

Alcoa Corp. said Tuesday it will permanently close the Suralco alumina refinery and bauxite mines in Suriname, which were fully curtailed in November 2015 amid a limited bauxite supply and unfavorable market conditions. The company expects to record $90 million of fourth-quarter restructuring-related charges after-tax for the closure.

A Brazilian man who broke out of a prison in the northern city of Manaus has been posting photos of himself on Facebook, bragging of his escape.

Brayan Bremer, who is serving a sentence for robbery, can be seen amidst dense vegetation giving the thumbs up. He is among 72 prisoners who escaped on Sunday from two prisons in Manaus.

Police in Manaus continued their search for the fugitives.

Costa Rica has marked the most violent year in the country’s history. End-0f-year statistics from the Judicial Investigation Police (OIJ) show that the country set a record for murders in a single year, with 577 reported homicides in 2016, up 19 killings from the previous record high in 2015.

El Salvador’s national police director says homicides dropped more than 20 percent in 2016 across the country, though the rate of 81.2 for every 100,000 residents kept the Central American country among the world’s deadliest. Commissioner Howard Cotto said that there were at least 5,278 killings in 2016, down from 6,665 in 2015.

Panama says it will hold talks with France in the coming days, after Paris confirmed the Central American country was back on its blacklist of tax havens because of the Panama Papers leak. The discussions were to highlight progress Panama has made in boosting transparency and cooperation in tax matters, Panama’s foreign ministry said in a statement.

Campaigning opened Tuesday for Ecuador’s February 19th general elections, which will decide who succeeds leftist President Rafael Correa after a decade in power. Eight candidates are vying to replace Correa, a radical economist and one of the last of a generation of leftist leaders who dominated Latin American politics for more than a decade.

Barbados police are investigating the unnatural death of a 26-year-old American visitor, which occurred around 7:20 last night at Indian Pond, St Joseph. The visitor, whose name has not been released, reportedly arrived here on Monday and was apparently working on a stage and lighting for Old Year’s Night celebration activities when he fell from a 20-foot scaffolding. He was rushed to the Queen Elizabeth Hospital by ambulance where he was pronounced dead on arrival.

A cabinet shakeup has occurred in Guyana. In what appears to be a demotion, Health Minister George Norton has been sent to the Ministry of Social Cohesion after several controversies over drug procurement under his watch at the Ministry of Public Health.

The Dominican Republic National Drugs Control Agency (DNCD) has  reported having seized over 10 tons of drugs in 2016, calling it a positive end for the year in the fight against drug trafficking. The agency also said it halted the transfer of several tons of drugs across Dominican territory and arrested hundreds of people in the over 20,000 searches.

The USVI has banned the use of plastic bags, even biodegradable ones as of  Jan. 1. But fines for use will only kick in on April 1, 2017.

Jamaica’s Reggae Boyz will take on The United States soccer squad in a February 3 friendly match that will serve as the US’ final tune-up before resuming World Cup qualifying in March. The match will cap the team’s training camp, which includes another friendly a week earlier against Serbia, and will be Bruce Arena’s only time with the team ahead of the crucial World Cup qualifiers. The match is set for 7 p.m. ET and will be broadcast live on FS1, with streaming available on FOX Sports Go.

The Real Housewives of New York star  Luann de Lesseps and her Tom D’Agastino are honeymooning in the Bahamas. De Lesseps posted a photo of her and D’Agastino sitting in the front seat of a convertible and showing off their new weddings rings on Monday just before the two took off on their island vacation, writing: ”We’re off! Happy 2017! #weddingweekendfun.”