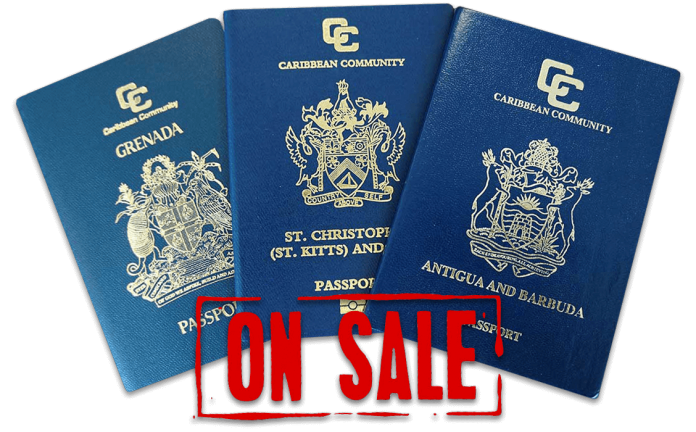 News Americas, NEW YORK, NY, Fri. Nov. 20, 2020: Here are some of the top business and finance news making headlines across the Caribbean this week.

Here are all the Caribbean countries you can get a second passport.

The citizenship by investment programme for Antigua and Barbuda provides a second passport to investors offering visa-free travel to over 150 countries including the UK, EU Schengen zone, Hong Kong and Switzerland.

There are several options for investment to gaining citizenship in Antigua. Investors can choose to contribute $100,000 to the Antigua National Development Fund. They can invest $1.5m in establishing a business ($5.0m for two or more investors) or invest $400,000 in a government approved real estate project (can be reduced to $200,000 for connected investors).

Citizenship by investment in Dominica is available through two options. The first is by making an economic contribution (donation) to the country under the government’s investor visa programme. The second option available since January 2015 is through real estate investment.

Dominica has become one of the most affordable and flexible second passport programmes available. Until 1993 it was not possible to gain Dominican citizenship without residing in the country. The Dominican government changed that with the Economic Dominica Citizenship programme whereby the need for residency to gain citizenship was waived. Applicants making such a contribution are granted full citizenship for themselves and their family allowing visa free travel to over 152 countries including the UK and the EU Schengen zone.

The Grenada investment visa programme provides second citizenship in Grenada and a passport to investors offering visa-free travel to over 153 countries including the UK, EU Schengen countries and China. Grenada also offers access for its citizens to the USA E2 treaty investor visa.

Applicants need to invest either $150,000 as a donation or $350,000 in a government approved real estate project (can be reduced to $220,000 for connected investors) and maintain the property investment in Grenada for at least 5 years.

St. Kitts and Nevis officials have temporarily reduced the donation to  The Sustainable Growth Fund (SGF), the newest investment channel under St Kitts and Nevis’ CBI Programme, introduced by Prime Minister Timothy Harris, from $195,000 to just $150,000, for a family of up to four. The offer runs through 2020. As of November, 6, 2020, the list of family members qualifying for St. Kitts &Nevis citizenship has been extended to include the investor’s spouse, children, parents, grandparents, and dependent unmarried siblings aged 30 years old or younger, of either the main applicant or their spouse.

Another option to acquire St. Kitts & Nevis Citizenship is through a $200,000 Real Estate investment – with a fixed minimum investment regardless of the number of family members.

A qualifying investment for a St. Lucian passport must satisfy the minimum investment level in either the Saint Lucia National Economic Fund or an approved real estate project.

Australia-based mining company Alicanto Minerals has made its first-ever gold find in Guyana, only days after another mining company, Troy Resources, announced that it had found gold deposits underground.

The company made the announcement on Monday. According to Alicanto, it has discovered a maiden resource of 500,000 ounces of gold at its Arakaka gold mine, which is located in Region One. According to the company, this works out to 1.8 grammes per tonne (g/t) of milled ore.

Meanwhile, Alicanto Managing Director Peter George was quoted as saying that the 500,000-ounce maiden find was just the start of what he believed would be a rapidly growing inventory at Arakaka.

Alicanto’s discovery follows on the heels of fellow Australian mining company Troy Resources, which announced a few days ago that it had found some 15 grammes per tonne of milled ore or g/t, at its Karouni, Smarts Underground mine in Region Two.

The Government of Saint Lucia will enact a government tax named the “Tourism Levy.” Revenue collected from this tax is earmarked for  tourism marketing and development. Beginning December 1, 2020, guests staying at registered accommodation service providers will be required pay a prescribed nightly levy on their stay.  In the two tier system, guests will be charged US$3.00 or US$6.00 per person per night, depending on a room rate below or above US$120.00.  A rate of 50% of the Tourism Levy will apply to guests who are 12 to 17 years at the end of their stay.  The fee will not apply to children under 12 years.  Registered accommodatoin service providers are required apply and collect the levy and remit to the administering authority.

In addition, the Government of Saint Lucia with effect from December 1, 2020 will reduce the Value Added Tax (VAT) from ten percent (10%) to seven percent  (7%) for accommodation for tourism accommodation service providers.

Western Union will end its remittances business to Cuba on Nov. 27, following the Cuban government’s refusal to transfer remittance operations to a company not controlled by the military, as required by the Donald Trump Administration.

The United States announced at the end of September that it would impose sanctions on American companies that do business with Cuban military entities, a measure that directly impacts Fincimex, a subsidiary of GAESA, the Cuban military conglomerate that controls, among other things, the remittances business.

“For more than 20 years, Western Union has been sending money to Cuba from our clients to their families and loved ones to cover their expenses for food, rent and others, including micro-businesses. We deeply regret this situation and its impact on our clients,” the company said.

Western Union had asked Cubans in exile to speed up the sending of remittances to the island because “time is running out.”

The pressure against Fincimex, the Cuban counterpart of Western Union, is part of a strategy of the government of President Donald Trump, whose administration has ratcheted up sanctions against Cuba, a country it accuses of supporting the Nicolás Maduro regime in Venezuela.

The Trump administration has canceled cruise travel, restricted remittances to $1,000 per quarter, reduced the airports to which Americsns can travel from the United States, and promoted a broad international campaign to denounce human rights abuses committed by the Cuban government. Trump also activated Title III and IV of the Helms-Burton Act to allow Cuban Americans and to file lawsuits in U.S. courts for compensation for assets expropriated by the Fidel Castro government in the early 1960s.

Jamaica has recorded a near 12 per cent economic decline in the past quarter as the impact of the COVID-19 pandemic worsens.

The Planning Institute of Jamaica said today that the island had recorded an 11.3 per cent economic decline for the second quarter when compared to the same period last year. The PSOJ said that many of the major industries, such as those in the service industries, especially the hotel and restaurants sector, continue to experience decline during the three month period.

The situation has been exacerbated by the reductions in income due to job losses and reduced work hours.

The trend is for exotic food sauces and condiments and natural, plant-based ingredients according to a new report commissioned by the Caribbean Export’s Absolutely Caribbean virtual expo, that was held on November 17-18th.

“We are seeing great potential for Caribbean food products across Europe at the moment”, said Dr. Damie Sinanan, Manager of Competitiveness and Export Promotion at Caribbean Export. “It seems that consumers are looking for different flavours and playing more with spices but there is much promise amongst natural foods such a chocolate, teas and gluten–free flours. We are really excited about the range of quality, artisanal producers that we have at our expo this year which will help to support trade between the Caribbean and Europe.”

In the UK, the Caribbean food market is now worth almost £100m and foodservice wholesale giant Bidfood singled out Caribbean food as a Top 10 cuisine trend. In 2019, UK retailer Tesco also highlighted Caribbean fare as an ‘emerging trend’. Sauces and condiments in particular are worth £1.12bn and grew by 16.8% in the last year.

In Spain, the ‘foods from other countries’ category has grown by 105.9% since 2012. Spicy tastes have seen strong growth with Caribbean flavours named as an emerging trend in sauces and spices, increasing around 55% to three million kilograms and over 29% in value to nearly €19m.

Almost a third (32%) of German consumers have said they like Caribbean food (1) which has led to an increase in heat and spice on the table during family dinners (2).

People in the Netherlands are also increasingly open to incorporating greater variation into their cooking, including flavor combinations and the use of fresh and natural ingredients, with the value of chili sauces climbing 125% in value since 2016.

How Coffee Brings The World Together – NPR (blog)

This Latin American Lake Has Turned Into A Desert