Home Commentary Geopolitics Of Oil And Water In Guyana: Part 1 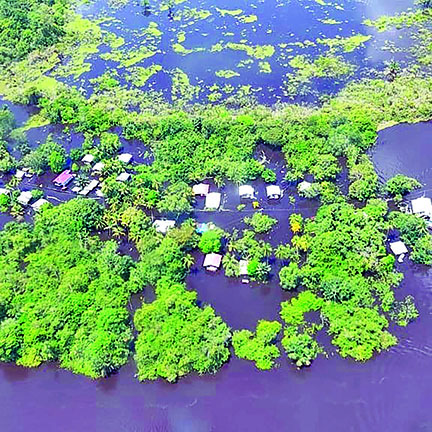 News Americas, WASHINGTON, D.C., Fri. June 18, 2021: In the first of this two-part series on Guyana’s current flood travails, I offer an analysis of the country’s geography and environmental circumstances against the backdrop of the country as a petro state. The second article will explore the impacts of the flooding, explore strategies for current and future governments to leverage oil revenues, aid recovery efforts, and mitigate future disasters.

Mother Nature has been blessing Guyana effusively in recent years, with 19 offshore oil finds between May 2015 and April of this year by a tree-member consortium of ExxonMobil, Hess Corporation, and China’s National Offshore Oil Corporation. Just recently, on June 9, the consortium announced its 20th discovery. Total oil reserves are now estimated at close to 10 billion barrels equivalent. Oil production began in December 2019 and now stands at almost 120,000 barrels per day, with projections to hit 800,000 barrels per day by 2025 and one million barrels per day two years afterwards.

Hess is so confident about the profitability of it Guyana operations that this past March it sold US$150 million of its assets in Denmark intending to redirect the funds to what it deemed its “world class investment opportunity” in Guyana. Moreover, earlier this month ExxonMobil relinquished 80 percent of its interest in Ghana’s Deepwater Cape Three Points offshore oil operations to boost its assets in Guyana. Apart from the consortium, companies from Canada, Britain, Spain, and Israel also are aggressively pursuing Guyana’s Black Gold. Thus, Guyana has been commanding world-wide geopolitical and geoeconomic attention as a consequential petro power-in-the-making.

Yet, the geopolitics of oil is being rivaled in its spotlighting by another factor –  the geopolitics of water – by current developments in South America’s lone English-speaking republic, where Mother Nature‘s fervor and fury are also evident, with torrential rains  inundating coastal and hinterland areas with equal opportunity rage, disrupting lives and livelihoods across the nation in the process. However, in order to appreciate the country’s extant aqua trials and tribulations it’s important to understand something about its geographic and environmental conditions.

Guyana’s is a “Wet Neighborhood,” a term I coined in a March 2020 report for the Center for Strategic and International Studies to describe the country’s tenuous geographic and environmental realities. Water is in the country’s DNA, so to speak. Indeed, the word Guyana itself is an indigenous Indian, called Amerindian in Guyana term, meaning “land of many waters.” The country has 965 miles of navigable rivers meandering through its 83,000 square miles, with some 270 waterfalls, many of which are breath-talking, and dozens of natural lakes and ponds. An additional Wet Neighborhood aspect is the fact that some 80 percent of the country is forested, a significant portion of which forms part of the Amazon rainforest, which both generates significant rainfall and regulates it.

Guyana’s coastline is a significant – and troubling – aspect of the Wet Neighborhood. It runs 285 miles along the Atlantic Ocean and is six feet below sea level in some places. The country relies on several features as part of its protection from the fury of the ocean. One is a coastal wall, construction of which dates to 1855 during the time of British rule. Sadly, the Sea Wall, as it’s called locally, has not been maintained adequately over the years. In some places the overflow from the Atlantic Ocean creates waterfalls along the coast.

Mangrove forests are another protective measure. They perform several vital functions, including dampening the action of the Atlantic waves, reducing their energy, as well as trapping sediments and stabilizing shoreline substrates. As well, quite importantly, the mangrove forests aid carbon sequestration, which is the long-term removal of carbon dioxide from the atmosphere to slow or reverse atmospheric CO2 pollution and to mitigate or reverse global warming.

In addition to the coastal wall and the mangrove forests, the country maintains a network of rivers and canals to channel the flow of water from the country’s interior to the Atlantic Ocean along with a system of sluices designed by the Dutch when they colonized Guyana several centuries ago. Generally, the sluices, called kokers in Guyanese vernacular, are supposed to be closed at high tide, to prevent inundation, and opened at lower tide, to allow the outflow of water. These Wet Neighborhood realities exacerbate the country’s vulnerability, especially because the capital, Georgetown, with a population of 400,000 people, sits along the coast and some 80 percent of the country’s population lives in coastal cities, towns, and villages.

Thus, Guyana has had to contend with flooding for much of its history. The most devastating recent episode was in January 2005, when the country suffered the highest recorded rainfall since 1888. The result was a massive flood that affected some 84 percent of the population and damaged the social and productive sectors and the infrastructure to the tune of almost US$ 500 million. The country’s Wet Neighborhood circumstances are impacted by climate change realities. Although Guyana serves as a carbon sink because of its rainforest coverage and low utilization of fossil fuels, global warming impacts its rainfall and therefore its flooding experiences.

A decade ago, the Union of Concerned Scientists found that groundwater extraction, soil compaction, and drainage of wetlands are causing Guyana’s coast to subside. Quite troublingly, they noted that “From 1951 to 1979, sea level off Guyana rose at a rate some six times the global average, (0.4 inch, or 10.2 millimeters per year), around 6 times the twentieth century average or 3 times the 1993 to 2009 annual average.” A few years later, in 2014 to be exact, the Caribbean Planning for Adaptation to Global Climate Change Project sounded the alarm that: “the entire fabric of Guyanese society—population, agriculture, industry, and infrastructure—is vulnerable to even slight increases in sea level rises, rainfall intensities, saltwater intrusion, and droughts.”

As head of the University of Guyana I initiated several lecture series to facilitate public discussion of critical national and international issues. Colgate University distinguished economist Jay Mandle, delivered a memorable talk on “Petroleum and Climate Change in Guyana’s Future” in October 2016. He warned that “the warming of the earth’s atmosphere means that, with the passage of time, Guyana will have to cope both with a rise of the Atlantic Ocean and an intensification of storms. In combination, these events will create water management problems that are beyond the capability of the plain’s water control system.”

Mandle also cautioned that “the sea wall will be breached, the flow from the Interior will increase beyond the capacity of the drainage canals, rivers will rise above their banks, and the resulting damage will undermine the water control infrastructure itself.” Besides, he worried that not even the mangrove forests will be spared, and he predicted ominously that “as the ocean rises, the trees will be crushed between the encroaching sea and the settlements on the plain. In short, global climate change means that the Guyanese Coast will be invaded by both salt and freshwater flooding.” I hope he turns out to be wrong.

Mother Nature’s generosity to Guyana with the blessing of oil clearly is matched by her charity with water. How the nation manages the water partly will influence how it will benefit from the oil.

EDITOR’S NOTE: Dr. Ivelaw Lloyd Griffith is the Former Vice Chancellor of the University of Guyana, Senior Associate with the Center for Strategic and International Studies-CSIS and Fellow with the Caribbean Policy Consortium-CPC in Washington, DC. His next book, Challenged Sovereignty, will be published by the University of Illinois Press.