Home Commentary The Right To Produce 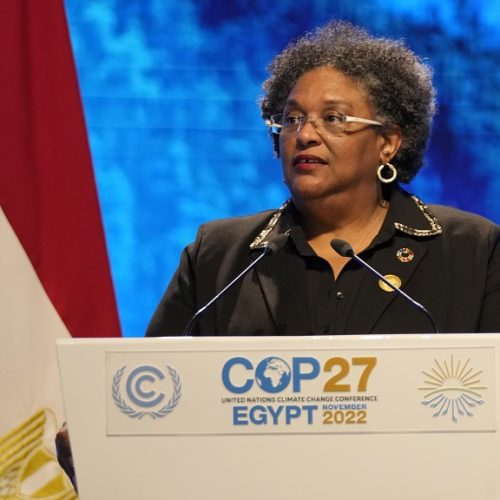 By Cristina Caus and Jerry Haar

News Americas, MIAMI, FL, Mon. Jan. 9, 2023: After years of resistance from rich governments, in November 2022 at the COP27 Summit in Egypt the principals finally agreed to set up a “loss and damage” fund to help developing nations cope with the side effects of climate change. At this same event, Mia Mottley, prime minister of Barbados, asserted: “We were the ones whose blood, sweat and tears (referring to developing countries) financed the industrial revolution. Are we now to face double jeopardy by having to pay the cost as a result of those greenhouse gases from the industrial revolution? That is fundamentally unfair.”

Even though at first glance, the climate crisis is an equal opportunity threat affecting all of us, in reality it has increased economic inequality between developed and developing nations by 25% since 1960. The proposed fund would greatly assist vulnerable countries that are prone to suffer more as a result of extreme weather caused by global warming aggravating the effects of population growth, migration and poverty. However, such a fund does not resolve the issue of who should take responsibility for a climate disaster we are facing. The larger question is: Would it be right for some nations to push forward with oil and gas production in a warming world?

Turning to the Caribbean, the region has been in the spotlight with the significant oil discoveries in Guyana and Suriname since around the same time when the Paris Agreement was signed by nations in 2015 with the ambitious goal of reducing carbon emissions by 45% by 2030 and reaching net zero by 2050. Do the new oil countries like Guyana have the right to increase oil production as the global community is trying to reduce the fossil fuel dependency and the carbon emissions generated by them? The judgment should be based on several considerations.

Who Pollutes And How?

According to data provided by the Global Carbon Atlas in 2022, the largest emitters were China, the U.S., India, Russia, and Japan. China’s and India’s shares combined account for 35% globally. Not only do these two economies lead with the largest populations in size[1], but they are also the top manufacturing countries in the world, with China being the “world’s factory” and providing 28.7% of the global manufacturing output.  Steel production, for example, specifically accounts for around 10 % of China’s CO2 emissions. That is a significant contributor, but perhaps less surprising when we learn that half the world’s supply of steel is manufactured in China. Even though China and India are the ones blamed the most for CO2 emissions, roughly 70% being generated by the use of coal in manufacturing plants, developed nations should be accountable as well, as these are the economies that outsourced their industrial activities to China and India for the most part. Not only did these countries outsource their manufacturing in China where the labor is abundant and cheaper, but they outsource their carbon emissions along with it.

The Right To Economic Growth

Guyana’s natural resource of 11 billion barrels of recent oil discoveries should be given the same consideration. In the case of China, an abundance of human resources was the primary economic driver since 1978 when the country opened up and reformed its economy to receive foreign companies and investment in manufacturing. China’s economy has grown to one of the largest and most powerful over the last decades, its GDP growth has averaged over 9% a year and has lifted over 800 million people out of poverty, with significant improvements made in access to education and healthcare. In 2021, China became the richest developing nation with a total GDP of $17.73 trillion. Interestingly enough, China is now the leading nation in renewable energy investments with over $100 billion in solar and wind energy alone in 2022.

Guyana, as with other developing nations with oil reserves that were recently discovered (for example Namibia, in September 2022[3]) should be given the same right to use these natural resources to benefit their people. This presents a momentous opportunity to boost economic growth and diversify the economy providing resources to address human development needs and infrastructure gaps. The oil production will serve not only as an attraction for foreign investment in the country but will also benefit the entire region by creating jobs and developing talent in nonoil industries for future generations. It will also serve as a catalyst for clean energy projects and bridging the gap towards a net zero future. Notably, Guyana is already making a transformational leap towards decarbonization by investing $83.3 million in a renewable energy project with the support of the Inter-American Development Bank and the Norwegian Agency for Cooperation.

In the global net zero race with a focus on clean and renewable energy, the interest and investment in oil and gas exploration and production might look like a highly improbable decision at first but given the events the world has been going through for the past 3 years, it is no exaggeration to say that we are facing the “first truly global energy crisis,” according to the head of the IEA. The pandemic, followed by the war in Ukraine and the gas shortages in Europe, combined with increasing oil prices, have had a domino effect on the supply chain, manufacturing, and distribution, proving that we are still heavily dependent on oil and gas.

The time is now for countries like Guyana to be supported by the global community for the benefit of everyone. Increasing production of oil will balance the energy market, contribute to the economic growth of developing regions vulnerable to climate change, and in parallel create financial resources for governments and nations to invest in the transition to a net zero world.

A Criminal Attack on Democracy: Why Brazil’s Fascists Should Not Get Amnesty

Here’s What You Should Know About The New Welcome Corps Immigration...