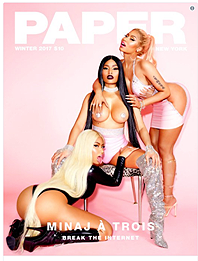 News Americas, NEW YORK, NY, Fri. Nov. 17, 2017: Dancehall star Vybz Kartel will have to sit tight in a Jamaican jail as he tries for an appeal hearing.

The appeal hearing for the dancehall sensation who was convicted of murder along with three of his associates in 2014, has been rescheduled from February next year. Kartel, whose real name is Adidja Palmer, along with the other men, was convicted of the murder of Clive ‘Lizard’ Williams. They are all now serving life sentences as a result of the conviction.

Jamaica has lost one of its bright up and coming dancehall artiste. Unicorn was on Tuesday shot dead by unknown assailants on Bowens Road in Kingston 13.
The singer, whose real name is Donovan McMurray, was 43. He was best known for his song ‘Think Bout Me,’ which features DJ Macka Diamond.

Nicki Minaj Turns Up The Heat For Paper

Trinidad born rapper Nicki Minaj has turned the heat way up for Paper magazine. The cover is undeniably raunchy.

The “Minaj à Trois” cover, which captures three of Minaj’s many different sides all, interacting with each other. In one shot, Nicki sits in a chair wearing nothing but pink Spanx and pasties. Another ‘Minaj,’ in a scantily clad pink dress, stands above her and gropes her breast while the third ‘Minaj,’ dressed in a pleather bodysuit with long blonde hair flowing down her backside, is seen sitting on the floor with her face between the sitting-Minaj’s wide-open legs.

“It came to me one day that ‘Minaj à trois’ had never been done,” Paper editor Drew Elliot wrote about the cover image, shot by photographer Ellen von Unwerth. The issue hits stands on November 28th.

Rihanna is busy conquering the world of beauty now and that includes through Fenty Beauty. The line is getting high praise including from top actress Viola Davis.

“The thing about Fenty, which I own, is that I can get a base makeup that is exactly my skin tone,” Davis told Refinery29. “I don’t feel like I have to get something five shades lighter, or mix two shades together in order to get my shade. And it feels like my natural skin. It’s full coverage, and I’m honored by the fact that I’m recognized in this beauty line. I thank Rihanna for that. As opposed to going to a drugstore and another drugstore, especially if you’re somewhere in like, I don’t know, Montana where you can’t find anything for you. It makes you think then, Ok no one is thinking of me. It’s something that I struggled with a lot.”

Chronixx’s Caribbean Chronology Tour will begin tomorrow, November 18th at the Guyana National Stadium in Guyana. He will then move on to Grenada at the Grenada National Cricket Stadium on November 24th and then on the following day to Trinidad and Tobago at the Jean Pierre Complex.

The tour will then move to Jamaica with two shows. The first will be at Mass Camp in St Andrew on December 1 with Pier One in Montego Bay hosting the second show the following night. It will conclude in St Kitts at the Fort Thomas Hotel Ground in Basseterre on December 9.

Chronixx slammed the Jamaican government on Wednesday for what he said was the policy makers’ lack of support for the entertainment industry. According to the roots and culture artiste, governments across the world help to fund cultural events and reggae music, but successive Jamaican administrations have offered little support towards staging a concert like his Caribbean Chronology Tour.