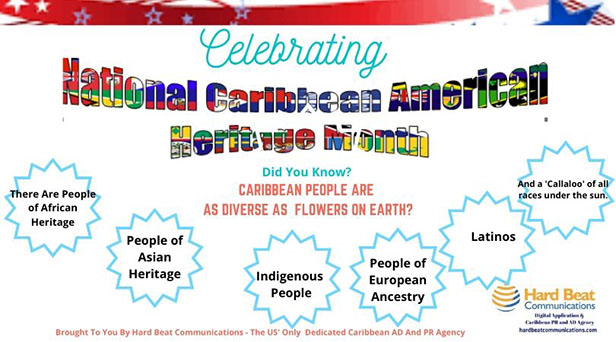 News Americas, NEW YORK, NY, Mon. June 1, 2020: For the 14th year since it was declared in 2006, the White House again issued a proclamation again declaring the month of June: “National Caribbean-American Heritage Month.”

Despite the administration’s anti-immigration stance which has seen thousands of Caribbean immigrants deported back to the region, including during the current pandemic, the U.S. President issued the proclamation on Friday, May 29, 2020, ahead of the June 1, 2020 launch of the 14th annual Month.

In it, the President acknowledged the many Caribbean Americans “serving as first responders, medical professionals, and other essential personnel on the front lines in the fight against the coronavirus.”

He also lauded many who have helped advance science and medicine, and those serving in the Armed forces.

“This month, we pay tribute to Caribbean Americans for all they have done to drive our country forward,” the proclamation states in part.

Interestingly, the only Caribbean American identified by name as having left an indelible mark on American culture was Puerto Rican baseball player Roberto Clemente.

The text of the full proclamation follows:

“From America’s earliest days, Caribbean Americans have contributed to the success, spirit, and character of our Nation.  For generations, their skills, knowledge, innovation, and initiative have enhanced and advanced many aspects of our society.  During National Caribbean-American Heritage Month, we celebrate the rich history and vibrant culture of the more than 4 million Americans with origins in the Caribbean.

“Caribbean Americans have helped improve our Nation by leading communities, advancing science and medicine, and advocating for the common good.  We are especially grateful for the Caribbean-American men and women who proudly wear our Nation’s uniform as members of the Armed Forces and those serving as first responders, medical professionals, and other essential personnel on the front lines in the fight against the coronavirus.  Our Nation is safer, stronger, and healthier because of their service and sacrifices.

“Caribbean Americans have also left indelible marks on American culture.  Roberto Clemente, a native of Puerto Rico and legendary baseball player, is one of many shining examples.  He not only had a stunning Hall of Fame baseball career, but he also dutifully served our Nation as a member of the United States Marine Corps Reserve for 6 years and served others throughout his life with profound care and compassion.  Like so many other Caribbean Americans, he continues to inspire us today and remind us of the strong connection the United States will always have with the Caribbean region.

“The United States is also the primary trading partner for the Caribbean nations that make up our Nation’s “third border.”  My Administration is dedicated to maintaining and strengthening our partnerships within the Caribbean regions, which are forged through bonds of friendship, diplomacy, and a shared commitment to democratic principles.  We will continue strategic engagement in the areas of human rights, maritime security, crime prevention and interdiction, education, health, energy, economic growth, and disaster recovery and relief.  Stability in the Caribbean — achieved through increased trade, job creation and investment, and efforts to counter organized crime and illicit trafficking — ensures a more secure, prosperous United States.

This month, we pay tribute to Caribbean Americans for all they have done to drive our country forward.

“NOW, THEREFORE, I, DONALD J. TRUMP, President of the United States of America, by virtue of the authority vested in me by the Constitution and the laws of the United States, do hereby proclaim June 2020 as National Caribbean-American Heritage Month.  I encourage all Americans to join in celebrating the history, culture, and achievements of Caribbean Americans with appropriate ceremonies and activities.

“IN WITNESS WHEREOF, I have hereunto set my hand this
twenty-ninth day of May, in the year of our Lord two thousand twenty, and of the Independence of the United States of America the two hundred and forty-fourth.

You May Like: The Caribbean Immigrant Victims Of Coronavirus

Grenada Thanks US, Celebrates 1983 Invasion