By NAN Staff Writer
News Americas, MIAMI, FL, Weds. July 7, 2021: Caribbean leaders and Caribbean nationals everywhere have joined the world in expressing collective shock at the brutal murder of the President of Haiti, Jovenel Moise, in the wee hours of this morning.

New CARICOM chairman and Prime Minister of Antigua and Barbuda Prime Minister, Gaston Browne, told the Caribbean Media Corporation (CMC) that he was in shock at the developments. It “very, very, unfortunate,” he was quoted as saying.
“I am shocked to hear about the assassination of President Moise and I pray the full recovery of his wife, who is reported to be hospitalized with bullet wound,” Browne said, adding: “the savage act, is a very unfortunate development coming at a time of great instability to Haiti.”
Trinidad and Tobago Prime Minister, Keith Rowley, said he was “shocked at the tragic developments in Haiti.”
“We offer our deepest condolences to the family of President Moïse and to the Government and People of Haiti, our brothers and sisters in the Caribbean Community (CARICOM) on this most distressing occurrence,” a statement said. “Trinidad and Tobago pledges to work together with our CARICOM colleagues and other hemispheric and international partners to support Haiti at this very difficult time.”

Jamaica’s Prime Minister Andrew Holness said “this heinous act is a stain on Haiti and a sorrowful time for the region.”

“May God be a special covering over his family and over the people of Haiti during this dark time in the nation’s history,” Holness added.

Dominica’s Prime Minister Roosevelt Skerrit, speaking on the state-owned DBS Radio, said “it is rather unfortunate that it has descended into the assassination of President Moise.”

“It is with profound sadness that the government and people of Saint Vincent and the Grenadines learnt of the assassination of Jovenel Moïse of the Republic of Haiti, a member-state of our Caribbean Community (CARICOM),” the Ralph Gonsalves government said in a statement. “This senseless and cowardly act of unbridled violence has shocked and outraged many throughout the Caribbean Community and the world. In our Caribbean Community we settle political differences peacefully through democratic institutions; we do not use violence and thuggery which undermine democracy and the rule of law.”

Prime Minister of Barbados, the Hon. Mia Mottley described the act as “atrocious” and said Barbados vehemently condemned it.

She added that violence should never be the solution and must be rejected in all circumstances.

“The assassination of President Moise of Haiti is an atrocious act which Barbados vehemently condemns. Violence can never be a solution, and must be rejected in all circumstances.

“Barbados urges all to pause and work at all costs for peace. The Haitian people deserve this. It is the necessary foundation for their stability and for democracy to emerge to protect them against the many vagaries they face, man-made and otherwise,” Prime Minister Mottley said.

“I am shocked and stunned by the tragic news of the assassination of the President of the Republic of Haiti, His Excellency Jovenel Moïse. This horrific act is a tragedy for both Haiti and the Caribbean. Those responsible for this indefensible and cowardly execution must be brought swiftly to justice,” he said in a statement.

St. Kitts and Nevis Prime Minister, Dr. Timothy Harris also condemned the “this heinous and cowardly act and hope that those responsible will soon be apprehended and brought to justice.”

He extended condolences to the family and people of Haiti and hoped that they would find solace and comfort during this traumatic and challenging time.

“This crime is an attack against the democratic order of Haiti and the region,” Dominican Republic President Luis Abinader said.

Speaking to MSNBC on Wednesday morning, White House Press Secretary Jen Psaki said President Biden would be briefed on what she called a “horrific attack,” but said the U.S. government was still assessing and “gathering information from this side.”

“We stand ready and stand by them to provide any assistance that’s needed,” Psaki told CNN later.

“We stand prepared to assist. We’re certainly in touch, but obviously this is — this is still developing, and so we’ll assess what their needs are. And we’re ready to provide needs — you know, respond to the needs they ask for,” she said later on board Air Force One en route to Crystal Lake, IL.

“We are shocked and saddened to hear of the horrific assassination of President Jovenel Moïse and the attack on First Lady Martine Moïse of Haiti,” US President Biden said in a statement. “We condemn this heinous act, and I am sending my sincere wishes for First Lady Moïse’s recovery. The United States offers condolences to the people of Haiti, and we stand ready to assist as we continue to work for a safe and secure Haiti.”

The OAS offered its deepest condolences and solidarity with the Haitian people at this difficult time.

“We condemn in the strongest terms the assassination of the President of Haiti, Jovenel Moise, a criminal act that occurred early today. This attack is an affront to the entire community of democratic nations represented in the Organization of American States (OAS). We most vehemently deplore this attempt to undermine the institutional stability of the country,” the bost said in a statement. “We reject this objectionable act. Disagreement and dissent are part of a strong and vigorous system of government. Political assassinations have no place in a democracy. We call for an end to a form of politics that threatens to derail democratic advances and the future of the country.”

The Secretary-General of the United Nations also issued a statement condemning “in the strongest terms,” the assassination of President Moïse.

“The perpetrators of this crime must be brought to justice,” he said, while extending his deepest condolences to the people and Government of Haiti and the family of the late President and calling on all Haitians to preserve the constitutional order, remain united in the face of this abhorrent act and reject all violence.

The State of Qatar also strongly condemned the assassination while stressing the need to prosecute those involved in the horrific incident and bring them to justice. In a statement today, the Ministry of Foreign Affairs reiterated Qatar’s firm position on rejecting violence, terrorism and criminal acts, regardless of the motives and reasons.

The statement affirmed Qatar’s keenness to establish security and stability in Haiti and expressed the condolences of the State of Qatar to the family of the late president and to the government and people of Haiti.

The Caribbean Community (CARICOM) leaders will meet later today in an emergency session to discuss the assassination.
HAITI PM
Outgoing Haitian Prime Minister Claude Joseph announced the assassination to the world in a statement and said that Moise’s wife was also injured and has been hospitalized.
“An unidentified group of individuals, some of whom were speaking in Spanish, attacked the private residence of the President of the Republic and mortally wounded him,” Joseph said in a statement on Wednesday. “The First Lady was wounded by a bullet and the necessary measures are being taken.”
Joseph has called on the population for calm and indicated that the police and the army would maintain order.
“The security situation of the country is under the control of the Haitian National Police and the Haitian Armed Forces,” Joseph said. “All measures are being taken to guarantee the continuity of the State and to protect the nation. Democracy and the Republic will triumph.”
Haiti’s Embassy in Washington D.C. released a statement on behalf of the government this morning, providing little further detail, but saying Moïse had been killed in a “well-coordinated attack by a highly trained and heavily armed group.”

Martine  was reported to be in stable but critical condition and efforts were under way to move her to Miami for treatment, said Bocchit Edmond, the Haitian ambassador to the United States.
Haiti has suffered for years from political instability, and Moïse had been governing by decree. Critics had accused the 53-year-old of ruling like an autocrat. 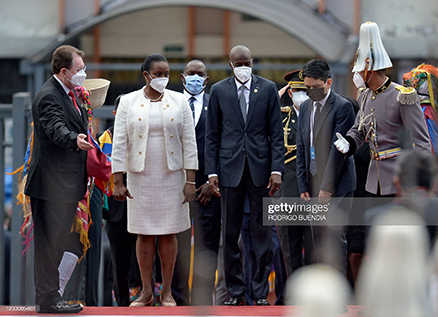 THE ATTACK
According to the Miami Herald, the gunmen stormed Moïse’s home in a hilltop community of the capital, Port-au-Prince, claiming to be agents of the U.S. Drug Enforcement Administration.

Videos seen by the Herald showed gunmen telling people at Moïse’s home to “put down your weapons. This is DEA.” Haitian sources told the Miami newspaper that the assailants were heard speaking English and Spanish, and that they were not DEA agents, but “mercenaries.”

ONLY SECOND LEADER TO BE KILLED IN OFFICE
Moise is only the second Caribbean leader to be murdered while in office in recent years and the first President. The first was Prime Minister Maurice Bishop of Grenada in 1983. A four-man People’s Revolutionary Army firing squad executed Bishop, three members of his Cabinet and four others by machine-gunning them. After he was dead, a gunman slit his throat and cut off his finger to steal his ring. The bodies were then transported to a military camp and partially burned in a pit. The location of their remains is still unknown.
Haiti was scheduled to hold general elections later this year.