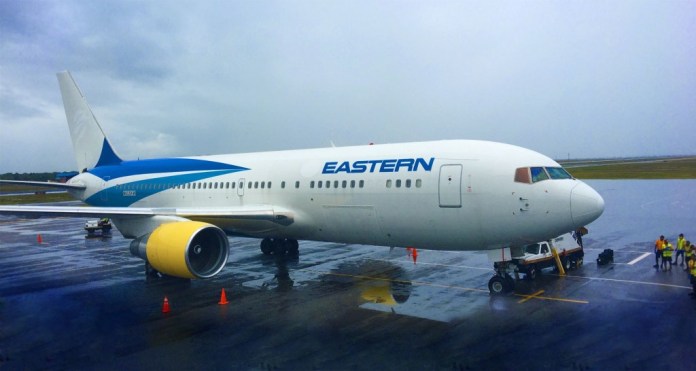 NEWS AMERICAS, NEW YORK, NY, Fri. Aug. 26, 2020: There was a scary moment in the air for one flight from Guyana to New York this week as the carrier was forced to shut down an engine.

Eastern Airlines flight crew on Tuesday night was forced to shut down on its approach to New York after departing Guyana, according to a report from Guyana Aviation and i-News Guyana.

The incident reportedly occurred on Eastern Airlines Flight 231, which had departed Cheddi Jagan International Airport at 3.25 p.m. and during its initial descent into JFK Airport, NY. The report said the flight crew received an indication which forced them to perform a precautionary shutdown of the left engine.

The crew eventually restarted the engine and performed an uneventful landing at 8.55 p.m.

According to Guyana Aviation, 215 passengers were on the flight, and it was reported that an IATA Flight Inspector was on board the Boeing 767 aircraft observing the flight.

Eastern Airlines, which is performing repatriation flights in and out of Guyana, was performing one of its weekly flights to New York when the incident occurred. The aircraft had previously arrived in Guyana from Miami with 41 passengers.

Aviation officials in Guyana are reportedly conducting an investigation into the matter.