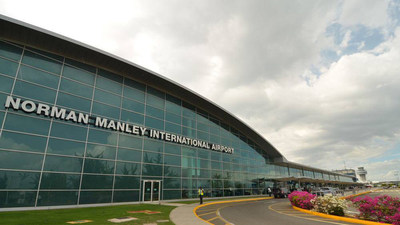 KINGSTON, Jamaica, Feb. 27, 2020 /PRNewswire-HISPANIC PR WIRE/ — Grupo Aeroportuario del Pacífico, operator of 12 airports in Mexico and the international airports of Norman Manley in Kingston and Sangster in Montego Bay, participated in a in the Routes Americas hemispheric meeting, which was held in Indianapolis, United States.

The main purpose for Jamaica’s participation in this forum was to attract new flights, air routes and airlines to this Caribbean Island. Grupo Aeroportuario del Pacífico supports the promotion of Jamaica as destination.

Routes Americas is the main meeting forum of airlines and airports in the American hemisphere, and it served as a platform to lay the grounds for the world meeting that will be held in Milan, Italy next September, where Grupo Aeroportuario del Pacífico will promote Jamaica more intensely as a tourist and investment destination. Given the global nature of the event, has the participation of airlines from Europe, Africa, Oceania and others, which, in general, would otherwise have no presence at Routes Americas.

Grupo Aeroportuario el Pacífico is committed to Jamaica and acknowledges it both as an extraordinary destination given its natural wonders and excellent tourist offering and as an attractive market for foreign investment that promotes the country’s sustainability, economic and social development.

Grupo Aeroportuario el Pacífico, S.A.B. de C.V. (GAP) (NYSE: PAC; BMV: GAP) is a Mexican corporation developing its activity in the airport sector. GAP operates 12 international airports in Mexico and two in Jamaica, servicing over 330 destinations through 35 airlines. Its stock is listed in the Mexico and New York Stock Exchanges. In 2018, GAP served 44.9 million passengers, 10.4% more than in 2017.

The airports managed by Grupo Aeroportuario del Pacífico are located in:

The airports managed by GAP in Mexico are owned by the Mexican government and have been allocated in a 50-year concession starting in 1998, as part of a domestic initiative to privatize and improve the quality and security of the country’s airport services.

In Jamaica, the government owns the Montego Bay Airport and the concession granted for its operation is for a 30-year period, which will conclude on April 2033. The Kingston Airport was granted for a 25-year concession. GAP took control of the operation and administration this past October 2019.

Grupo Aeroportuario del Pacífico believes in the value of each individual and seeks to trigger his or her potential through education. Better-educated Mexicans will raise their quality of life and contribute towards the country’s development. GAP, in line with its business model and through its Foundation, is committed to be a factor of change. We work on two strategic pillars: work with the community, through the GAP Schools, and on training the airport community, with Community Training Centers.

Lendl Simmons: West Indies’ promising batsman who is yet to make his … –...

Immigration Is on Agenda for Obama in Mexico