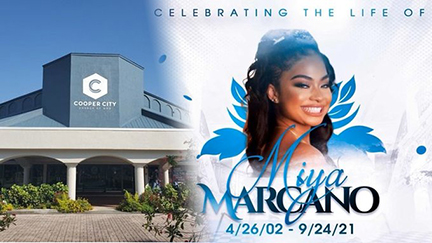 The 19-year-old Valencia College student’s funeral will be held at 11 a.m. at the Cooper City Church of God, 9191 Stirling Rd. She will be laid to rest at Bailey Memorial Gardens, 7801 Bailey Rd., in North Lauderdale.

Officials of Cooper City are warning of periods of heavy traffic from 10:30 AM to approximately 1:30 PM in the area of Stirling Road and SW 90 Avenue and urge drivers who are not attending the funeral service, to seek an alternate route during those times today.

Her large circle of family and friends traveled from the British Virgin Islands, Trinidad and Tobago, Canada, and other parts of the world to say goodbye at a celebration of her life on Wednesday.

There were heart-shaped flower arrangements on stage. Tripods held large glamourous portraits. Bouquets of spring flowers surrounded a cobalt blue closed casket. A projector showed pictures of the little girl who loved music and the teenage girl who danced to every beat.

The family has announced the launch of the ‘Miya Marcano Memorial Foundation.’

“Miya is everything to her father and I, as well as so many people around the world. The creation of the Miya Marcano Memorial Foundation brings my heart so much joy during such a difficult time,” Miya’s mother Yma Scarbriel, said.

The foundation’s mission is to support, educate and provide resources to families of missing persons, while advocating for the protection of students and others in the vulnerable population.

“The ability to help other families and the opportunity to do my part to evoke change with the very systems that didn’t protect my daughter Miya gives us some comfort. Miya always said she would change the world, and we want to ensure her legacy lives on and helps as many people as possible,” Scarbriel said.

The family requests that in lieu of flowers the public donate to the memorial foundation at http://www.miyamarcanofdn.com

Marcano missed a Sept. 24th flight from Orlando to visit her family in South Florida, her family asked the Sheriff’s Office to check on her at the Arden Villas apartments near UCF, where she lived and worked.

During that welfare check, the deputy found Marcano’s bedroom door was blocked from opening by a dresser, which meant a roommate had to enter Marcano’s room from a back window, the statement said, adding that a responding deputy “noticed the window had been tampered with.”

Her body was bound with black duct tape across her mouth and tape also tying her hands and feet together on October 2nd.  She was found wearing jeans and a bra, as well as a robe and her purse was found nearby containing the shirt she was last seen wearing. Her cause of death has not yet been determined.

Orlando Police have said 27-year-old Armando Caballero, a maintenance employee at the Arden Villas complex where Marcano worked and lived, was waiting for her inside her apartment Sept. 24, before he killed her and dumped her body at another Orlando area apartment complex.

Marcano, a graduate of Flanagan High School in Pembroke Pines, was in her second year at Valencia College in Orlando, pursuing an arts degree. Miya was the daughter of Trinidad born, US-based deejay Marlon Marcano, aka DJ Eternal Vibes and Yma Scarbriel of the BVI.

Cuba Gets Ready To Battle Omicron

Five Caribbean B&Bs You Should Know