News Americas, NEW YORK, NY, Weds. Dec. 28, 2016:  There is no denying that 2016 was an amazing year for Barbados-born singer turned entrepreneur and actress, Rihanna. So we had no hesitation in handing the NAN Caribbean Born Person Of The Year title to RiRi. Here’s why:

1: Robyn Rihanna Fenty is today one of the most famous and richest living artist from the Caribbean today with an estimated net worth of US $75 million. Yet she has proven again this year that her roots remain very important.

2: As she received the “Michael Jackson Video Vanguard Award” at the Video Music Awards at Madison Square Garden in New York City in August this year, Rihanna paid tribute to the country of her birth and the Caribbean region as a whole, noting the award was for her country and  the Caribbean’s as a whole.

3: Rihanna’s ‘Work,’ a collaboration with rapper Drake for her eighth studio album, Anti (2016), pays tribute to the dancehall and reggae rhythms of the Caribbean and using West Indian Patois and Creole unabashedly in the song despite the critics calling it ‘gibberish.”

5: “Work” put dancehall music center stage on the global scene and the collaboration was definitely Caribbean with the producer being long-time Drake collaborator Boi-1da, who was product of Kingston. And it harkened back somewhat to RiRi’s breakout single “Pon De Replay,” proving you can take the girl out of the Caribbean but you can’t take the Caribbean out of the girl.

6: Rihanna in 2016 gave back to help the youth in her region. Though the foundation named in honor of her grandparents, the Clara Lionel Foundation, Rihanna launched and awarded scholarships to several lucky Caribbean students. Among the recipients was Destini Gibbs to who received a scholarship to study genetics at Cornell University. The organization started by Rihanna in 2012 and named after her grandparents, Lionel Brathwaite and the late Clara Brathwaite, intends to award several people from the Caribbean each year with the scholarship awards ranging from US$5 000 to up to $50 000, with the amount being based on the student’s financial need. 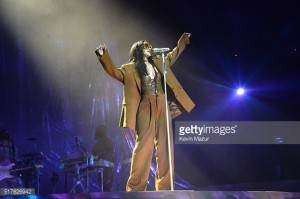 7: Rihanna has had a scandal free year and excelled as Rolling Stone’s journalist Brittany Spanos, stated: Rihanna is one of only three “black women” who “radicalized Pop in 2016.” She recently scored her 21st top five single, tying Elvis Presley’s chart record and her ‘Anti’ album has sold over 591,000 recognized copies in the United States and was the third most streamed album of 2016. ‘Anti’ also won the award for Favorite Soul/R&B Album at the 2016 American Music Awards and Rihanna is also nominated for 8 awards at the 59th Annual Grammy Awards in Feb. 2017 including Best Urban Contemporary Album and Best Recording Package.

8: In 2016, Rihanna, 28, grew up from the half-naked oversexed looking singer to a classy, sophisticated young entrepreneur. Her dress reflected it as did her focus on business – turning her social media accounts largely into a sales tool to promote her product endorsement deals with Dior, Puma, Samsung, Stance and Manolo. 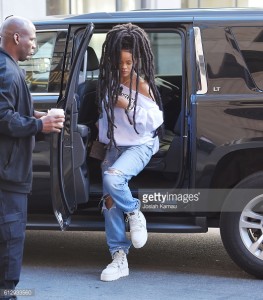 9: When Rihanna was not churning out radio hits, touring and collecting awards, she was on set acting this year, with a part of Star Trek Beyond, as Marion Crane in the Bates Motel Season 5, and ending the year filming for ‘Ocean’s 8’ alongside top actors like Anne Hathaway and Sandra Bullock. In the film, Rihanna plays a dreadlocked character in the all-female installment of the Ocean’s Eleven franchise. Ocean’s Eight hits theaters on June 8, 2018!

10: Rihanna still found time to celebrate her country’s 50th anniversary of independence on November 30, 2016, flying from a performance in Abu Dabi and from winning the Shoe of the Year Award from ‘Footwear News’ 2016 in NYC, to joining Prince Harry and the Prime Minister of Barbados to sing the country’s national anthem at the Kensington Oval at the Golden Anniversary Spectacular Mega Concert and to send a clear message on HIV testing on Dec. 1, 2016, with a public test alongside the Prince.