News Americas, NEW YORK, NY, Weds. Dec. 28, 2016:  There is no denying who the Caribbean sports personality of 2016 was. To the man who dominated sports, athletics, the Olympics and media coverage in 2016, the NAN title for Caribbean Sports Personality Of 2016 has to go to Usain St. Leo Bolt. Here’s why:

1: The Sherwood Content, Trelawny-born athlete is one of the most naturally gifted and known athlete the world over today, creating history as predicted at the 2016 Olympic Games in Rio when he achieved the ‘Triple Triple’ – three gold medals at three consecutive Olympic Games.

2: Bolt now holds nine Olympic gold medals and eleven World T&F Championships titles and he has cemented his legacy as a legend in world sport and currently holds the world records in the 100m, 200m and 4x100m with times of 9.58 secs, 19.19 secs and 36.84 secs. 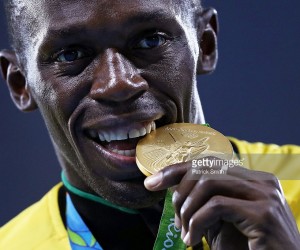 3: His other honors this year include the fifth title of IAAF World Athlete of the Year and the 2016 GQ Man of The Year.

4: Bolt is also an entrepreneur. He has his own clothing line in conjunction with Puma; his own watch made by Hublot; his own restaurant ‘Tracks & Records’ in Kingston, Jamaica; his own shaving company, Champion Shave, and his own insoles company.

5: He also endorses some of the top brands in the world including Puma, Gatorade, Hublot, Virgin Media, XM, one of the fastest growing Forex and CFD Brokers, and Digicel among others.

6: Bolt stays true to his roots even though he has an estimated annual earnings of $30 million  and ranks 32nd of Forbes’ list of the world’s highest-paid athletes. He remains an inspiration for many young people in Jamaica and across the Caribbean and showing that it does not matter where you start out but where you finish and that hard work, focus and dedication can take you there.

7: Bolt’s film, “I Am Bolt’ has been released globally this December to international acclaim.

8: Bolt has stipulated that all shoots with him must be done in Jamaica as one of the many ways in which he wishes to give back to his nation and community. As he stated recently: “I really try to help and really try to give as much as I can. It’s just a part of me. I also try to give a lot back to my community because I know the struggles; I came through it, and I see a lot of kids in the struggle.”

9: He has proven unabashedly that he loves and respects his mother, Jennifer Bolt, an Adventist believer. He is also not ashamed to show his faith or speak of it. Before every race he makes the sign of the cross and according to sources, he packs a Bible in his suitcase whenever he travels around the world.

10: Bolt gives back to his community and the young people there annually, holding his annual Christmas Treat again for the children in Sherwood Content earlier this week.