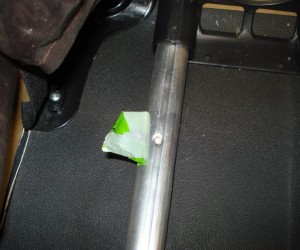 News Americas Now, NEW YORK, NY-Monday, January 12, 2015- An arriving passenger at JFK Airport in New York was arrested after a white powdery substance was discovered in the passenger’s luggage.

On Jan. 6, CBP officers stopped Ms. Chevelle Rusheen Nesbeth who arrived on a flight from Montego Bay, Jamaica. During the course of the inspection, CBP officers felt an unusually dense hand rail in each suitcase. Ms. Nesbeth was escorted to a private search room where CBP officers probed the hand rails and discovered a white powdery substance which tested positive for cocaine.

Ms. Nesbeth was arrested for the importation of a controlled substance and was turned over to Homeland Security Investigations. The total weight of cocaine seized was approximately 2.5 lbs. with an approximate street value of more than US$45,000.

“This latest seizure demonstrates the vigilance of our CBP officers, and their excellence in detecting those who would try to smuggle these illegal substances,” said Robert E. Perez, director, Field Operations New York.

Ms. Nesbeth now faces federal narcotics smuggling charges and will be prosecuted by the U.S. Attorney’s Office in the U.S. Eastern District Court of New York.

It should be noted that all defendants are considered innocent until proven guilty.

Starbucks to Open Its First Store in Colombia

Stars in black and white on Grammys red carpet

Life of Pope Francis to be turned into a film – Telegraph.co.uk