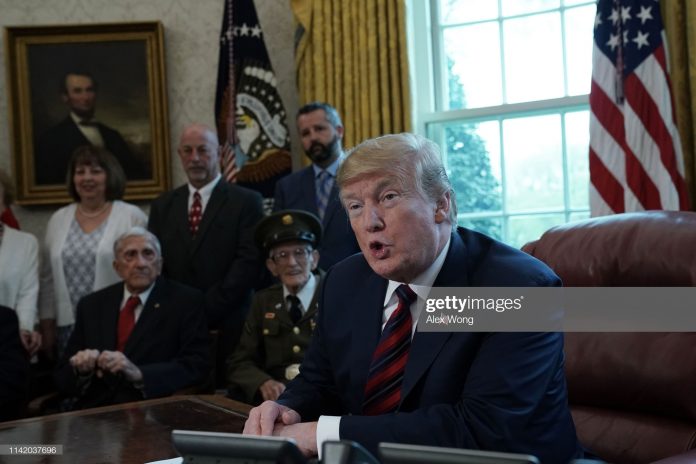 News Americas, MIAMI, FL, Fri. April 12, 2019: After a week that left many shaking their heads in disbelief last week at the lunacy being spewed by the President of the purported greatest country in the world, the dialogue has again shifted to the mental competency of the so-called leader of the free world.

Words such as “dunce,” “fool,” “idiot,” “ignorant,” “moron,” lunatic” and other choice adjectives have littered social media platforms after Donald Trump’s latest alternative fact diatribes of the past week, on everything from immigration and immigrants, the border, Mexico, windfarms, Puerto Rico, Israelites and “your prime minister,” Benjamin Netanyahu.

But the one phrase that to me completely sums up the condition is not found in the English dictionary but in Jamaican patois. It is “eediat bwoy,’ and while it does means “idiot” or “foolish” in the translation, somehow the two Jamaican terms strung together with an emphasis on the ee’s seem like a more accurate analysis of the degenerative syndrome troubling El Trumpeto.

In case you missed it, here are 10 ‘eediat’ things spewed by Trump just this past week on the immigration front:

1: Trump denounced a landmark immigration case by blaming it on an imaginary “Judge Flores.” Or as he added: “…whoever you may be.” The reality is there is no “Judge Flores.” The case in question was named for Jenny Flores, a 15-year-old migrant teenager from El Salvador who entered the US illegally in the 1980s who sued the US and won in Reno versus Flores.

2: Trump used his favorite tool, Twitter, to tweet: ‘Our Country Is Full,’ while calling on Mexico to stop illegal immigration hours after Kirstjen Nielsen resigned as secretary of the Department of Homeland Security. “Mexico must apprehend all illegals and not let them make the long march up to the United States, or we will have no other choice than to Close the Border and/or institute Tariffs. Our Country is FULL!,” he tweeted.

4: Trump, during his border visit, downplayed the claims of people seeking asylum at the border, declaring again without evidence that many are gang members with MS-13. The reality is that many are families fleeing crime, gang threats and poverty in Central America.

5: Trump claims Mexico is doing “NOTHING” about migrants coming north. Yet data shows the country markedly tightened migration controls during the Barack Obama administration and detained over 30,000 foreigners in the first three months of this year. But that hasn’t stopped Trump from tweeting: “Mexico is doing NOTHING to help stop the flow of illegal immigrants to our Country. They are all talk and no action. Likewise, Honduras, Guatemala and El Salvador have taken our money for years, and do Nothing. The Dems don’t care, such BAD laws. May close the Southern Border!”

6: Trump, who has not pushed or passed any significant immigration reform bills since taking office, claimed in a new interview with his favorite channel Fox News, that he could change America’s immigration laws in just “15 minutes.”

7: In that same interview, Trump blamed other countries for not “giving us their finest.” This has been a recurring theme of his diatribe against immigrants since launching his campaign by claiming Mexico is sending criminals and rapists.

8: Asked whether it was time to set up a summit with the leaders of Central American countries like Mexico, Honduras, Guatemala and El Salvador to discuss immigration, Trump quickly brushed off that idea by stating: “No I don’t need a summit. I think we’ve done very well without a summit.”

9: After threatening to close the border with Mexico, which would impact the US’ own economy, Trump on Saturday said if Mexico does not continue to apprehend migrants, he is going to have to no choice but to “close up the border.”

10: Trump, according to a report published Sunday by the Times, berated Nielsen regularly, calling her at home early in the mornings to demand that she take action to stop migrants from entering the country, including doing things that were clearly illegal, like blocking all migrants from seeking asylum despite the federal laws, court settlements and international obligations of the US.

Sounds like a serious case of ‘eediat bwoy’ syndrome or as my Jamaican brethren would say: “A eediat ting dat bwoy!”

More Americans Have Died From COVID-19 Than In 6 Wars And 9/11, But Trump Is Still Coming After Immigrants

‘This Is The Dark Time My Love’

Amid Covid-19 Pandemic, The Supreme Court Continues To Embolden The Trump Agenda

Video Of The Day – See A Chicken Making NFL Predictions