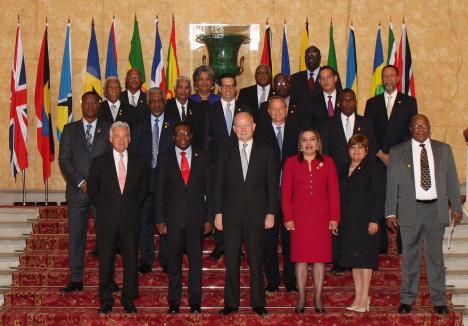 News Americas, LONDON, England, Mon. June 30, 2014: Trying to describe the overall outcome of the Eighth UK-Caribbean Forum, the biennial government to government dialogue that took place in London on June 16/17, is far from easy.

On the one hand it is clear that this ‘summit’, which was intended to reset Britain’s relationship with the Caribbean, had a number of clear and important deliverables. On the other, it is hard to assess quite where this once special relationship in almost constant flux for more than fifty years, will be in another twenty.

So much so, that even the UK seemed uncertain about how to portray its nature and substance. As it began, a short notice appeared on the Foreign and Commonwealth Office website that characterized the relationship as ‘unique’ and as being based on friendship, mutual understanding and shared values.

This Forum, however, was different compared to any previously held, being much more focused on deliverables, with it being accepted that virtually nothing had resulted from the thirty one action points agreed at the last one in Grenada in January 2012.

As an overall theme, the eighth Forum had as its objective building a stronger partnership able to enhance Caribbean economic growth, competitiveness and prosperity, with particular attention being paid to energy security, the development of skills and education, and the ways in which more might be done to tackle security concerns.

When it came to energy and education there was a meeting of minds.

It was agreed that the UK will support technical assistance that will catalyze a regional gas market. For their part, Caribbean governments continue to explore the regional potential for natural gas and other forms of sustainable energy as an alternative to imports of fuel oil. It was also agreed that the UK will share its experience of managing renewable energy systems through private sector-led mechanisms relating to smart grids, and better distribution and energy management systems. Britain also offered to work with regional regulators and utility companies to encourage utility reform.

The other area in which the two sides found a high level of resonance was in relation to education and skills. In an interesting recognition of the need to support the Caribbean to prepare for the world of tomorrow, the Forum agreed that both sides would explore, with partner organizations such as universities, think-tanks, civil society, cultural organizations, and the private sector, establishing programs that bring together young leaders from the UK and Caribbean in business, entrepreneurship, civil society and academia to develop their leadership potential and exchange experiences.

On security, while there was agreement on the problems posed by organized crime, the Caribbean made clear that capitals would have to decide whether to accede to Britain’s request to implement, as the communiqué put it, reciprocal asset-sharing agreements, automatic tax information exchange arrangements, exchanging criminality data, and effective extradition regimes.

However, what became clear during the meeting was that many of the most immediate issues for the Caribbean, such as the need for new terms of engagement between small states and larger

developing and developed economies, and the need for help to address the graduation of much of the region out of development assistance, were matters on which Britain would only agree that greater consultation would be required. Much the same held true when it came to Caribbean concerns about the impact that UK visa policy is having on business persons and entertainers seeking to benefit from the services opportunities in the Economic Partnership Agreement with Europe, or continuing Caribbean concern that Air Passenger Duty was having a negative impact on Caribbean tourism, despite the welcome development earlier in the year that resulted in the UK tax on flights to the Caribbean being reduced.

Speaking to Caribbean Foreign Ministers during and after the event to try to understand from a Caribbean perspective how they saw the meeting, it was clear that they had a sense that the approach of the United Kingdom had changed.

Beyond its welcome but essentially short to medium term offers of functional support, the Forum for them seemed to confirm, perhaps intentionally, the existing perception in the region that the future role of Britain will be very different.

While they welcomed what they saw as a new realism and a willingness to focus on specific concerns especially education and energy security, they seemed individually uncertain about where this more limited approach will take the dialogue in future. The sense was still of family, but one in which a benign parent had retired and was looking forward to helping the grandchildren.

Gone, they felt, were any previous assumptions about the relationship; but while the cultural ties remained strong, its future depth seemed less certain. Some observed that the UK was trying to identify a new role for itself within a limited budget, so that when it came to issues of real concern it was unclear whether the UK was prepared to make a difference. The point was also made that the role of the public sector in generating growth in small societies was not well understood by British Ministers as being of importance. Others felt the new approach was driven by the recognition by both sides that the Caribbean now had many other partners to work with.

Although helpfully CARICOM published on its website the opening remarks for CARICOM by the Chair of its Committee on Foreign Relations, Carolyn Rodrigues-Birkett, Guyana’s Minister of Foreign Affairs, at this eighth Forum, there were no public speeches opening or closing the event.

Instead the only part open to a broader audience was a well attended session on investment to which a business audience was invited and another with professionals in the Caribbean’s UK Diaspora at which UK politicians for the main parties and representatives from the Caribbean answered questions on UK-Caribbean relations.

To monitor what happens next and avoid what happened to the decisions coming out of the Grenada Forum, it was agreed that the two sides will meet again to review progress before the next Forum which will take place in the Caribbean, possibly in Suriname, in 2016.

The Eighth UK-Caribbean Forum made clear that the relationship and the nature of the engagement with the UK continues to change and has become more functional and pragmatic. If the Caribbean has any interest in making it different, it has few options left, the most prominent of which must be finding ways in which its future leaders in all parts of society engage the new and successful generation in its UK Diaspora that are interested in and able to lobby on policy, and make a difference as British citizens.

Falkland Islanders vote with an eye on Argentina

UK-U.S. relationship as strong as ever – British PM May