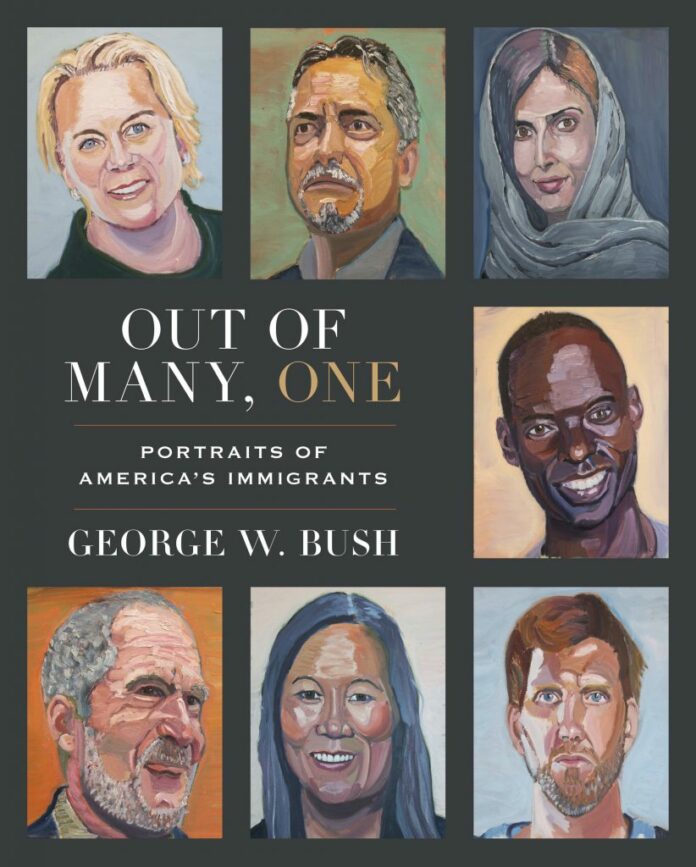 News Americas, FORT LAUDERDALE, FL, Weds. Aug. 12. 2020: It has been a dark time for immigrants in this country under the Donald Trump Republican-led administration. But one Republican former President is shining a much-needed positive light on this integral American community with a title that is comparable to the motto of Jamaica.

Former President George W. Bush will release a book of 43 portraits of immigrants he painted, that will be titled “Out of Many, One,” similar to the Jamaican motto: ‘Out Of Many One People.’

But a statement from The George W. Bush Presidential Center said the title of the book was inspired by the Great Seal of the United States, which for generations has declared E Pluribus Unum – “out of many, one.”

The powerful new collection of stories and oil paintings highlights the inspiring journeys of America’s immigrants and the contributions they make to the life and prosperity of our nation, states the book on its cover.

The upcoming book will mark a new chapter in the former President’s artistic career as he puts the spotlight on powerful four-color portraits and their accompanying stories.

“At its core, immigration is a sign of a confident and successful nation. It says something about our country that people all around the world are willing to leave their homes and leave their families and risk everything to come to our country,” President Bush stated. “Their talent and hard work and love of freedom have helped us become the leader of the world. Our generation must ensure that America remains a beacon of liberty and the most hopeful society the world has ever known. We must always be proud to welcome people as fellow Americans. Our new immigrants are just what they’ve always been — people willing to risk everything for the dream of freedom.”

Bush has criticized the state of modern immigration discourse. In 2018, on the day after the Trump administration issued guidance for asylum seekers at the border that threatened thousands of individuals with being turned away before they could plead their cases in court, Bush said he was “disturbed” by the immigration debate taking place in the United States. He has also praised the nation’s immigrant history as “a blessing” while calling for comprehensive reform.

“As our country continues to grapple with the complexities of immigration policy, Out of Many, One seeks to put us face-to-face with immigrants themselves so that we may hear their stories and better understand what America has given to them and them to America,” the Institute’s statement said.

The book will be released on March 2, 2020 as a standard trade hardcover and in an autographed deluxe edition, listed for $250, that will be clothbound and contained within a slipcover. President Bush will donate a portion of his “Out Of Many, One,” proceeds to organizations that help immigrants resettle.

A public exhibition of the portraits and an in-depth look at the many issues surrounding the immigration debate in our country will run from March 2 through January 2, 2022 at the George W. Bush Presidential Center.

It is indeed a breath of fresh air for immigrants, who have too long been scapegoated by the current President and many in the Republican Party.

The History Of Caribbean Immigrants In The US You Should Know

In Venezuela, public buses give way to private ‘dog carts’