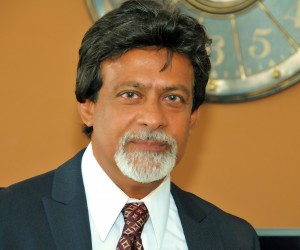 News Americas, BRONX, NY, Fri. Nov. 7, 2014: In a country where there was (and still is) no movie industry, a young boy, who developed a feeding frenzy for movies, always dreamt of being an actor.

And he felt that he had within him the flame that could light up the big screen anywhere, including Bollywood and Hollywood.

However, while this passion has not taken him to such dizzying heights, Mahadeo Shivraj, AKA Shiv, has indeed achieved enough success to make him a Guyanese celebrity!

Shiv’s CV includes five movies that he has produced himself, along with roles in 15 independent films and over 90 plays in Guyana and the US, as well as stints in a number of mainstream big screen and TV productions – The Smurfs, The Americans, Three Backyards, 30 Rock – and the documentary series We Are New York.

Among stars that he has rubbed shoulders with are Neil Patrick Harris, Tina Fey, Elias Koteas, Keri Russell and Rahul Khanna, the son of Vinod Khanna.

The first of six children, born to Purshotam and Sukhia Shivraj, originally from Mahaica Creek, Shiv grew up in Georgetown, but his best days were the opportunities to visit his grandparents. Mahaica Creek nurtured his love of nature as he explored the waterways and reveled in tree climbing and rural living.

Although he exhibited cricketing potential and was called to trials for the under-19 Guyana team, Shiv was not to be distracted from his deep-seated aspiration, especially since he grew up idolizing Hollywood greats, Clint Eastwood and Jack Nicholson, as well as Bollywood legends Sanjeev Kumar, Pran and Amitabh Bachan as consummate professionals.

Soon enough, he finished high school and ended up in the world of work. At age 16, he was employed at the Ministry of Education as an Accounts Clerk. There he met a beautiful young lady by the name of Beena whom he eventually charmed into becoming his wife. By the time the only son came along, Shiv had gotten his break, when he was offered the lead role in a play by Neaz Subhan, a work colleague and friend. That was in 1987, and the play was called “Vishwas.”

Before he knew it, Shiv, the actor was in demand. In his first year, he acted in nine plays, ten more the following year and so it went on. But movies were his ultimate dream, so it seemed like a God-given opportunity when he was offered a full scholarship to India to study in the Film Institute of Pune [Poona]. It was a five-year course, with one year for language, two years for acting and two years for directing. After some consideration, the pull of family and attendant responsibilities led Shiv to decline the offer, but not long after he got an opportunity to migrate to the United States of America and hope for a movie career intensified.

Eventually joined by his wife and son, Shiv put his dream on hold, to focus on taking care of his wife who became severely ill and then put his son through college. Once his son graduated and started to work in 2007, Shiv, who had already been involved in many plays within the Caribbean community, decided that he must have credentials in order to get into the Hollywood door. Thus he studied acting at New York University as well as at the Herbert Berghof Studios in Manhattan, then on to auditions.

“At my first audition, someone told me that I shouldn’t get my hopes up, because it is almost impossible for an actor to get a part before having at least 50 unsuccessful auditions,” Shiv reminisced. But, only after three auditions, his break came when he earned a role as a forensic specialist in a television series called ‘100 Centre Street.’

However, even though he signed a contract, he did not get to appear in that TV episode, as the director decided to cut that particular scene. But other roles came along including a cabbie in the ‘The Smurfs;’ Bellhop #1 in ‘3 Backyards;’ the character Rishi in the hit series ‘We Are New York;’ August Wells in ‘Truth;’ Raj in ‘Karma: A Love Story’ and a hot dog vendor in ‘30 Rock.’

Even though his career was satisfactorily, Shiv still yearned for bigger things. So after due consideration he turned to producing and directing movies for the Guyanese audience – at home and in the Diaspora – and opening up opportunities for others.

In spite of very limited resources and having to multi-task as director, producer, casting director, training instructor and so on, Shiv earned critical acclaim for ‘Till I Find A Place,’ his first movie, but piracy made it impossible for him to make any financial windfall and this became a recurring pattern for all his subsequent movies – ‘A Jasmine For A Gardener,’ ‘Brown Sugar Too Bitter’ and ’83 Million Gees.’

His latest movie, ‘A Forgotten Promise,’ is being released later this month in New York City.

A member of the Screen Actors Guild and the American Federation of Television and Radio Artists, Shiv has now decided that with no end in sight to the piracy, very little assistance forthcoming from the Guyana government and a high degree of skepticism from Guyanese especially in the Diaspora, he would venture into independent film making for the mainstream American audience and so that he can enter his movies in film festivals across the globe.

Meanwhile, he credits businessman and philanthropist, George Subraj for keeping him going, as without such financial backing for this latest movie as well as for ‘Brown Sugar Too Bitter,’ he would have probably have given up movie production.

Shiv feels that the business community should support movie making because, “Theatre, film-making are tools for educating as deep messages can be translated in an effective manner much easier and quicker.”

He also urges supporters and movie fans to buy his movies directly from his website, Mahadeo-shivraj-productions.com rather than purchasing pirated copies elsewhere. Shiv is also quite willing to use his movies as fundraisers for community organizations and NGO and anyone interested can call him at 917-972-0787.

Considering himself to be spiritual, Shiv lives by his motto, ‘be good and do good.’

He sees spirituality as being “always God conscious” and recognizing oneself as a soul. This simple and humble individual does not imbibe alcohol and is a true vegetarian.

In fact, for about two-and-a-half years he lived only on fruits and nuts to advance his spirituality and found that during this time he had “improved eyesight and high energy levels”, he “needed less sleep” and his very bad “allergies disappeared.”

He plans to return to that diet, to focus on his other love – cooking with love as the main ingredient – and to continue to do what he loves – everything movie related.

Shiv’s son, Monal now 29 years old, recently got married to the gorgeous Crystal Ramlakhan. Trained in criminal justice, Monal works in investigations. Now that the son has move out of the nest, Shiv remains with his true love, Beena at their home in Queens Village, New York City.