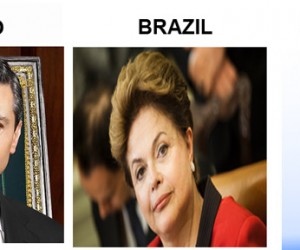 That’s the ‘gospel’ according to Forbes Magazine, which on Wednesday unveiled its list of the most powerful globally.

The magazine says it made its decision by first considering “whether the candidate has power over lots of people.”

Next they assessed “the financial resources controlled by each person.”For heads of state nominal GDP is the measure, while for CEOs, its company’s revenues and market value.

A determination is also made by measuring if the candidate is powerful in multiple spheres and if candidates actively use their power.

Only three people from two countries in the entire Latin America and Caribbean region made the list. Carlos Slim Helu, Mexico’s business magnate, investor, and philanthropist, was number 14, while re-elected Brazilian president, Dilma Rousseff, came in at number 31.

Mexican politician and the current President of Mexico Enrique Pena Nieto was listed as the 60th most powerful person in the world.

Topping the World’s 72 Most Powerful People for the second year in a row was Russian President Vladimir Putin. U.S. President Barack Obama had previously been on the top of the list for every year with the exception of 2010, when Hu Jintao, the former political and military leader of China, was No. 1. This year he was at again at number two while China’s President Xi Jinping climbed into the number three spot.

The top five remained the same as 2013. Pope Francis was at No. 4; German Chancellor Angela Merkel at number five; Fed chief Janet Yellen at No. 6 ; Bill Gates at number 7 and European Central Bank chief Mario Draghi at number 8.

Google’s Larry Page and Sergey Brin were at 9th, respectively while U.K. Prime Minister David Cameron slid up to No. 10.

This year’s list features 17 heads of state who run nations with a combined GDP of some $48 trillion. The 39 CEOs and chairs here control over $3.6 trillion in annual revenues. Among them are 14 founders, including the newcomer billionaires to the list, Alibaba’s Jack Ma and  Tencent’s Ma Huateng.