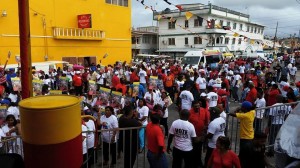 News Americas, PHOENIX, Arizona, Weds. April 1, 2015: Desperation leads politicians to do and say strange things. These are desperate times for the once invincible PPP. We are hearing some very strange things from the PPP’s quarters.

We recently heard that Moses Nagamootoo, in 2008, said that he was not Indian. That revelation by the PPP camp was followed by two other stunning revelations. First, it was revealed that Dr. Walter Rodney was a Pan Africanist who was proud of his African ancestry. Second, we hear from the PPP side that embrace of their ethnic identity by Eusi Kwayana, Tacuma Ogunseye, David Granger and David Hinds should be emulated by all Guyanese.

Seriously? This is double standard and political dishonesty of the highest order. Even from a desperate PPP, this one takes the cake. Maybe they have had the pollster do some polls for them that shows the Coalition winning the upcoming elections. Is the PPP’s ship is sinking?

Now, what is this thing about Nagamootoo saying he is not Indian, but Guyanese? What is the crime? None whatsoever! All Moses was saying is what all politicians have said. In our sensitive ethnic environment, politicians, as a rule, don’t play up their ethnic identity for fear of being branded racists. The preferred identity is the civic identity – Guyanese.  This is where our political discourse has been since independence. All of the political parties and Civil Society have agreed that this is the politically correct identification. A few of us, including this writer, have been hammered for invoking ethnic identity.

I can’t count the number of times I have been called racist for discussing or affirming ethnic identities. But you see, I don’t want to be President, so I can be politically incorrect.

But the worst (or best?) is left for last. We now hear from the PPP that the examples of Hinds, Granger, Ogunseye, Kwayana and Rodney – all proud Africans – should be emulated. These men have not abandoned their roots. Moses why you don’t emulate them? Oh how kind of the PPP boys! Maybe I will do like some others and mount the PPP platform tomorrow.  But no thanks, I stand on one side of the fence and I too old to jump fences.

The Trinidadian calypsonian , Winston Peters (Gypsy), sang a telling calypso in 1986 – “Captain the ship is sinking/Captain the seas are rough/We gas tank almost empty, no electricity/We oil pressure reading low/ Shall we abandon ship, or shall we stay on it?”/ And perish slow/ We don’t know/ Captain you tell we what to do.

Nagamootoo must be having a positive effect on Indian Guyanese. Keep on doing what you doing Moses. From all indications, the PPP’s ship is sinking!

EDITOR’S NOTE: Dr. David Hinds, a political activist and commentator, is an Associate Professor of Political Science and Caribbean and African Diaspora Studies at Arizona State University. More of his writings and commentaries and other news and views on Guyana and Caribbean politics can be found on his YouTube Channel Hinds’ Sight: Dr. David Hinds’ Guyana-Caribbean Politics and on his website www.guyanacaribbeanpolitics.com. His comments here are his own and does not reflect the views of News Americas Now dot com or its parent company.