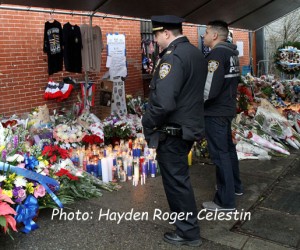 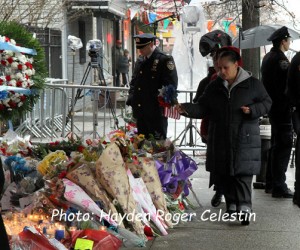 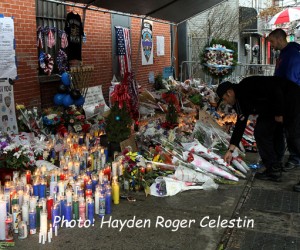 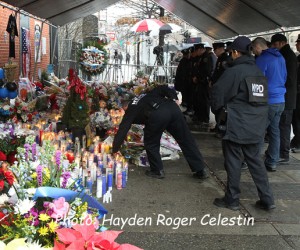 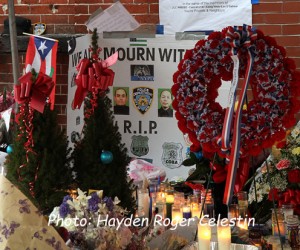 “Guyana Police Mourns Also In Solidarity,” said the sign carried by Joseph who is known in the Guyanese-American circles for songs like “Don’t Blame Me For Your Mistakes” and “You’re Still The Only Girl.”

Joseph stood outside a steel barrier that has now been put in place near the site where the two officers were ambushed and executed by 28-year-old Ismaaiyl Brinsley at 98 Tompkins Avenue in the Bedford Stuyvesant area of Brooklyn, NY.

Dozens of bunches of flowers and candles continue to grow in the shrine to the two officers as cops and civilians showed up in a steady stream to stand silently with heads bowed in tribute.

It also comes as protest against racism and police violence continued in the streets despite calls from NYC Mayor Bill de Blasio among other for a pause in demonstrations.

Hundreds marched on Fifth Avenue Tuesday night with some protesters chanting”Hey-hey, ho-ho. These racist cops have got to go” and “How do you spell racist? N-Y-P-D.” Others carried signs saying “Jail killer cops” and “Stop the war on Black America.”

Thousands including an estimated 20,000 to 25,000 cops and law enforcement officials from across the United States and Canada – are expected to gather in New York City in coming days for the funerals of the slain NYPD officers.

Officer Ramos is set to be laid to rest on Saturday Ramos following a 10 a.m. service at Christ Tabernacle Church in Glendale, with interment at Cypress Hill Cemetery on the Queens-Brooklyn border. Officer Liu’s funeral will be held following the arrival of his relatives from China.

West Indies Cricket Squad Will Be Ready For South Africa