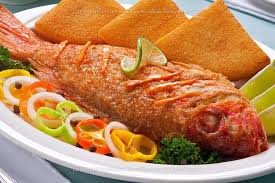 News Americas, NEW YORK, NY, Fri. Aug. 12, 2016:  Cassava is such a great staple and super food that even in Brazil it is regularly used in their cuisine as in the Caribbean.

Cassava flour is a great substitute for wheat flour and can be used to make breads, cakes, puddings and biscuit. In Brazil cassava flour is used as a breakfast  food – it is mixed with eggs, bacon and sausages.

Today, I will share with you the recipe for Bammy and Escovitched fish, the popular Jamaican snack/meal before the there was jerk chicken and jerk pork!

Bammy is made from Cassava and there are three ways to prepare it.
Soaking: In a shallow dish soak Bammy in 1/2 cup of coconut milk or regular milk , or salted water.

Let stand for about 30 minutes.

Toasting: After soaking for 10 minutes, broil both sides of the Bammy until toasted. Cut open and spread butter on the inside while it is still hot.

Frying: After soaking for 30 mins, fry both sides of the Bammy in hot oil until golden brown (about  6 minutes on each side). Cut into quarters.

Wash and peel the Yuca (cassava).

Using a grater, grate the yuca using the finest section.

Using cheesecloth or a clean cotton towel, squeeze the grated cassava to remove as much moisture as possible and discard the liquid.

Add salt to the yuca mixture and stir it in well. Break up any lumps.

Divide grated yuca into 2 equal parts and set aside.

Heat a frying pan. (A cast iron skillet works well). Do not add any oil.

When the pan is hot, place one half of the grated yuca in the middle of the pan. Spread it out with a spatula, or back of a spoon, into a circular cake that is approximately two inches around and 1/2 inch thick.

2 lb. large Snapper (you may also use parrot, King, or Sprat fish).

Wash fresh snapper fish with lime or lemon and season with salt and black pepper.

Marinate for one to two hours.

In a separate pot, sauté the onions, and pepper in 1/4 cup of oil.

Add vinegar and pimento seeds. Bring to a boil for one minute. Remove from heat.

The Diversity Of Caribbean Cuisine