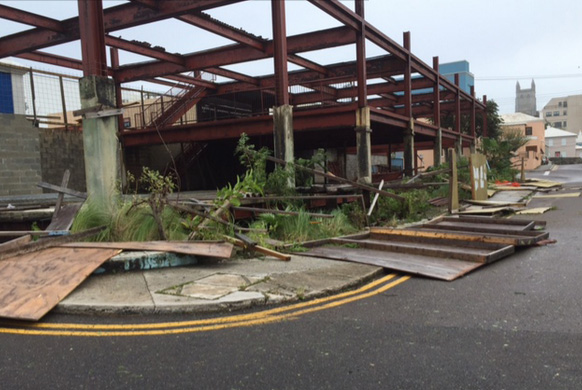 News Americas, HAMILTON, Bermuda, Fri. Oct. 14, 2016: The eye of Hurricane Nicole, the latest storm of the 2016 season, slammed into Bermuda Thursday as a category three storm, bringing heavy rain, wind and flooding, downing trees, taking off roofs, damaging boats and plunging many into darkness. But no serious injuries or loss of life was reported as of last night.

The power, however, was still out as of late last evening for some 20,000 households according to the island’s Emergency Measures Organisation [EMO] and the public was advised that until power is restored, traffic lights outside of the city of Hamilton was not operational. Motorists ere urged to travel with extreme caution in the area of traffic lights.

Government offices, buildings and schools are set to remain closed today, Friday, Oct. 14, 2016. The storm also caused some damage to the island’s Causeway and as of late yesterday, the EMO was waiting an assessment of the L. F. Wade International Airport to see if damages were sustained. Cleanup efforts were expected to continue until early today.

Hurricane Nicole, which came to the Caribbean on the heels of deadly Hurricane Matthew, reached the British territory early Thursday with 115 mph wind. But by Thursday afternoon, crews were clearing roads, and many islanders were posting pictures of calmer seas and clearer skies.

“Nicole is now racing away,” said James Dodgson, deputy director at the Bermuda Weather Service. “There’s been a bit of sunshine trying to poke through.” Forecasters cancelled a tropical storm warning  last evening.

Forecasters at the National Hurricane Center last night said the center of Nicole will continue to move farther away from Bermuda but the storm could become a post-tropical cyclone on Saturday.

"To Travel Is to Take a Journey Into Yourself" — Danny Kaye – Huffington...