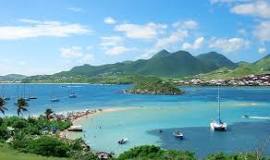 Top government and local VIPS joined 41 Chinese delegates and several other overseas delegates for the opening reception and dinner which also included the presentation of the ICN 2015 Leadership Award.

A St. Martin tourism pioneer who was attracted to the sector at age 12 and went on to serve the island as a deputy mayor and creator of the Syndicat d’Initiatives, the precursor to the current Saint Martin Office of Tourism, was the ICN 2015 Leadership Award winner.
Romeo Fleming, head of the Romeo Fleming Group of Companies, which includes the current Hertz Rent a Car on St. Maarten/St. Martin, Xaro Tours and Equisite Tours, was last night presented with the award by ICN founder Felicia J. Persaud and President of the Office of Tourism of Saint Martin, Hon. Jeanne Rogers Vanterpool.

Fleming was recommended for the award by the Office of Tourism of Saint Martin. He joins other top ICN honourees including Sir Richard Branson, Royal Caribbean Cruises International and Gordon “Butch’ Stewart.

In accepting the award, Fleming said he was thrilled and humbled to receive the honor and looked forward to seeing a thriving tourism sector in Saint Martin.

ICN Founder, Felicia Persaud said that Fleming is a true visionary and embodies the spirit of the award which was created to honour leadership and foresight.

“Mr. Fleming showed courage and vision when he obtained his very first bank loan to purchase cars while establishing the given license to operate Hertz Rent a Car St. Maarten/St. Martin in 1980. Then in 1983, Mr. Fleming was elected deputy mayor and president of the Saint Martin Tourism Office and became recognized as someone who generously worked develop and propel the island’s tourism sector for 24 years. That is real leadership,” Persaud said. “This makes him a true leader in the island of Saint Martin and the Caribbean and worthy of our 2015 Leadership Award.”

The 2015 Invest Caribbean Now conference was held on September 25th at the Saint Martin Chamber of Commerce building and spotlighted on the investment opportunities in the tourism sector of Saint Martin and is presented by The Government of the Collectivité of French Saint-Martin, The Office of Tourism of Saint-Martin and executives at Invest Caribbean Now (ICN), in collaboration with the Sino-American Friendship Association and the Chinese American Business Development Center of New York, Hard Beat Communications, One Caribbean Television, the St. Maarten Chinese Association, CaribPRWire and News Americas Now.

The Collectivité of French Saint Martin is located in the northeast Caribbean, approximately 300 km (190 mi) southeast of Puerto Rico and shares the 37 square mile island with Sint Maarten, a country within the Dutch Kingdom. The Collectivité offers low rates of taxation for investors; exemption from property tax for five years for new commercial premises and reduced transfer tax on the acquisition of land for the purposes of priority activities.

Invest Caribbean Now (ICN) is the definitive private sector investment agency of the Caribbean. It is based in America’s financial capital of the world, New York City. Now in its fifth year, ICN is the brainchild of Caribbean-born media entrepreneur, Felicia J. Persaud and is owned by Hard Beat Communications, Inc.

Invest Caribbean Now promotes and pushes for the right investment opportunities in the Caribbean region; offers a concierge service for high end investors seeking to make the right connection with key opportunities, governments and other parties in any Caribbean destination and connects small entrepreneurs in the Diaspora with SME micro loans.

Nine Inch Nails to go back on road after reinventing itself

Busted With Cocaine On Montego Bay Flight To Philly