News Americas, NEW YORK, NY, Fri. Aug. 29, 2014: Could the top seed and 2011 US Open champion Novak Djokovic be taking a page out of the book of the world’s fastest man, Jamaican-born Usain Bolt?

Djokovic on Thursday at the Open seemed to be extra friendly with fans, even giving them this version of – could it be – ‘To Di World” pose’ watered down, Djokovic-style of course?

Last week, Djokovic  also treated fans to his version of Bolt’s famous ‘archer’ pose after an appearance on the Tonight Show with David Letterman in New York City. 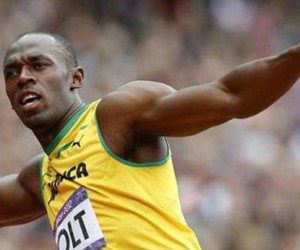 Bolt made the pose famous in 2008 after becoming the first man to hold both the 100 metres and 200 metres world records. Along with his teammates, he also set the world record in the 4×100 metres relay. He is the reigning Olympic champion in these three events, the first man to win six Olympic gold medals in sprinting, and an eight-time World champion.