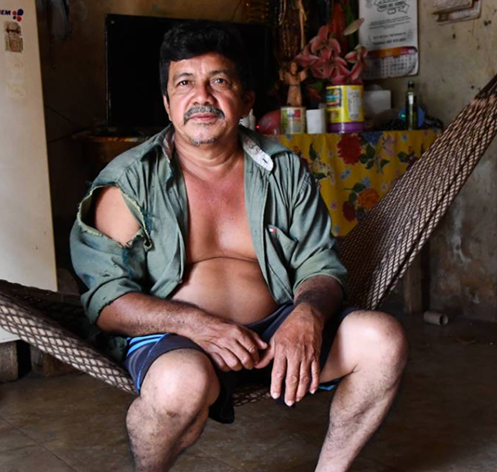 EMILIANO ZAPATA, Mexico, mon. March 22 (Thomson Reuters Foundation) – Jose Andres Celis was picking limes on his plot in southern Mexico when he felt a strong pain in his chest, the first sign of a deadly disease that would not be diagnosed for two years.

Celis was suffering from Chagas, a parasitic disease that afflicts about 7 million people globally and is known as a silent killer because it so often goes undetected.

The 54-year-old Mayan farmer got medication after his diagnosis, making him one of the luckier ones.

Most of Mexico’s infected are never tested or treated, academics say, putting them at risk of an enlarged heart and sudden death. Some live with Chagas for decades without symptoms.

“Once you feel bad, this disease doesn’t give you more time,” he told the Thomson Reuters Foundation as he sat on a hammock in his home in Yucatan state.

“It’s a quick death… lots of people are dying because of heart (problems) these days.”

Chagas, spread mostly via the faeces of blood-sucking bugs, is one of the neglected tropical diseases (NTDs) that affect 1.7 billion people around the world, mostly in poor countries, according to the World Health Organization.

Chagas patients are more likely to be cured if they are treated soon after infection, making early detection key.

But the coronavirus pandemic slowed Mexico’s already limited testing and the number of diagnoses more than halved in 2020 compared to 2019 as COVID-19 overwhelmed the health system.

He also said the government’s capacity to process tests had been curtailed.

“We can’t deny that diagnostic work, not just for Chagas, for other conditions, was affected by the pandemic,” he said.Researchers hold up a triatomine bug – known for spreading parasitic disease Chagas – collected in a home in Yaxachen, Yucatan. Thomson Reuters Foundation/Christine Murray

The WHO estimates some 7 million people mostly in Latin America are infected with Chagas, with 70 million more at risk.

The disease, discovered by Brazilian doctor Carlos Chagas more than a century ago, can be difficult to find because symptoms in the acute phase are similar to other illnesses, and many patients are asymptomatic.

In Mexico, the lack of proactive testing and a bureaucratic health system mean detection is low, with rural indigenous communities also facing language and distance barriers.

Between 2003 to 2020 Mexico’s government confirmed just 11,980 Chagas cases, according to data obtained through a freedom of information request. Academics have estimated that Mexico has 1 to 2 million cases, figures the government rejects.

If treated quickly with one of two medications, Chagas can be cured. But neither is available commercially in Mexico, where the only way to get them is through the health ministry.

“It’s a disease that stays invisible and silent in the body,” said Javier Sancho, head of the Global Coalition for Chagas Disease. “You have to look for it actively and that requires time, it requires resources.”

In Yaxachen, a tropical Mayan village in the Yucatan where brightly colored bungalows sit alongside traditional dwellings, Hermelinda May said her last Chagas medical appointment was canceled when the pandemic hit.

May and farmer Celis are among the 36 patients diagnosed by doctor and academic Adriana Gonzalez and colleagues in Yucatan state’s Oxkutzcab municipality in the course of their research into Chagas.

Of these, only Celis has received the treatment, with many local doctors failing to spot or help Chagas patients due to lack of training.

“It’s like a broken telephone… CENAPRECE tells you one thing, but in the villages we see something completely different is happening,” Gonzalez said.

CENAPRECE’s Sanchez said the government would soon start testing children and women of childbearing age in 78 high-risk areas to find newer acute cases, and wider testing to find all chronic cases would not make epidemiological sense.Hermelinda May, a 64-year-old patient with Chagas disease poses for a photo outside her home in Yaxachen, Yucatan. Thomson Reuters Foundation/Christine Murray

NTDs affect more than 1.7 billion people around the world, often trapping individuals in a cycle of poverty and exclusion.

In January, the WHO set out global targets to tackle 20 of the diseases including Chagas by 2030, with governments committing to sustain efforts that have seen 42 countries each eradicate at least one NTD in the last decade.

Experts have warned that the pandemic could reverse some of that progress.

“Even on a good day we’re neglected compared to malaria and HIV/AIDs, but now with COVID it’s been really tough,” said Peter Hotez, Dean of the National School of Tropical Medicine in the United States, of the pandemic’s impact on NTDs.

On Chagas, there are at least some positive signs. For more than a decade, Hotez and colleagues at the Baylor College of Medicine in Texas have been working with partners to create a vaccine against the disease.

The jab would be therapeutic, administered to infected people to stop the disease progressing.

“Fortunately we’re now in a very enthusiastic phase,” said Roberto Tapia, director of the Carlos Slim Foundation, which is funding the vaccine effort.

They hope to start clinical trials in 2022, but are still years away from a shot that could be distributed.

Meanwhile, the Drugs for Neglected Diseases Initiative is running trials to try to reduce treatment time from eight to two weeks.A nurse from the local health clinic in Yaxachen, Yucatan poses for a photo. Thomson Reuters Foundation/Christine Murray

Traditionally thought of as a disease affecting South America’s rural poor, Chagas is increasingly found in urban areas and richer countries like the United States and Spain.

Women sufferers can pass the disease to their babies and Janine Ramsey, a researcher with the Mexican government’s National Institute for Public Health, estimates that 40% of people infected in Mexico will have a shortened life.

Nelson Armando Caceres, a 52-year-old hairdresser in Mexico state, was initially misdiagnosed before medics in the capital ran tests confirming he had Chagas.

“It’s a killer that no-one knows,” he said, adding that he now has a pacemaker, carefully measures his food and cannot run more than 100 meters, but he feels lucky.

“This disease doesn’t give you many chances,” he said. “Very few of us survive.”

Copa America Will Go On As Court Rejects Injunctions

Approval of Obama’s Handling of Immigration Falls to 31% – Gallup.com

Forbes’ billionaires list gets bigger, and richer too – NBCNews.com (blog)

7 Critical Questions You Need To Ask Before Doing Business In...