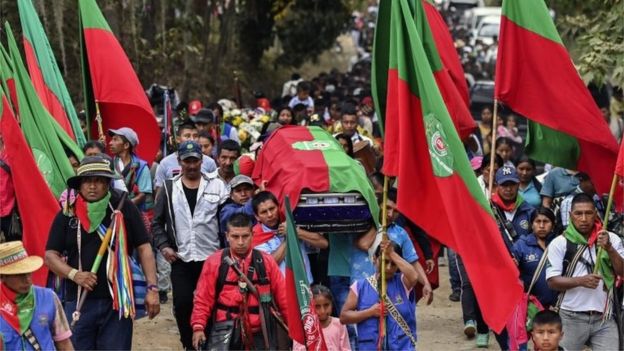 As protests continue against Honduran President Juan Orlando Hernández, he is claiming that recent allegations by U.S. federal prosecutors are based on drug traffickers trying to take revenge against him.

Guatemala’s President-Elect Alejandro Giammattei Says his country can’t do a migrant deal with the U.S.

A court in El Salvador resume Thursday the trial of Evelyn Hernandez over homicide charges after she gave birth to a stillborn baby at home.

Anger is mounting in Colombia as members of the indigenous Nasa group laid to rest two of their members who were killed on Saturday.

Details provided by Inês Etienne Romeu, the sole survivor of a torture centre in Brazil, could lead to the imprisonment of a man accused of raping her during her captivity.

People marched in Paraguay this week to call for President Mario Abdo Benitez to be impeached during a demonstration on his first anniversary in office.

And Argentine Soccer Star Lionel Messi has been nominated for UEFA’s Player of the Year award.