News Americas, NEW YORK, NY, Fri. Nov. 11, 2016: Millions of American voters are still coming to grips with the fact that a racist, a bigot, a xenophobe, a demagogue, a misogynist, a narcissist and a dummy is now the next President of the United States. All hail Hitler!

So now we are told we all need to accept the results and come together in a Kumbaya moment and magically heal. Forget the plain hate, rancor, anti-immigrant vitriol, the sexism and the bile that was stirred throughout the vicious election campaign run by Donald J. Trump. Now we are to expect it will somehow magically slither back into Pandora’s Box “Bigly” and “Beautifully.”

Wrong! From where I sit, Trump did not simply sow hate but he has now empowered those living in ignorance to be able to express it. Now Pandora’s Box is wide open and that’s frightening.

It’s already started. In San Diego, a Muslim student at San Diego State University was robbed and may have had her car stolen Wednesday by two men who made comments about President-elect Donald Trump and Muslims, according to police and university officials, who called the attack a hate crime.

In a separate incident Wednesday, a female student at the University of Louisiana at Lafayette was beaten, robbed and had her hijab ripped off by two men, one of them wearing a white “Trump” hat, police and university officials said.

The attacks occurred within hours of each other on a day marked by widespread protests over Trump’s startling victory against Hillary Clinton in Tuesday’s presidential election.

Expect more of this because Trump has tapped into what experts call the institutional racism that exists in America and the institutional racists who bought into Trump’s “Build A Wall” plan and the “Deport the 11 million” fallacy. They all hide behind the claim that it’s not immigrants and legal immigration they hate but those who come in illegally.

The reality is that many blue collared White men in America, without college degrees and even some with degrees, feel they are fast becoming the minority in a country where Whites were always the majority and in control. Brown and black immigrants have added to the African American population to push the United States to a place where the minority is fast becoming the majority and that is scary to many, especially in rural White America. 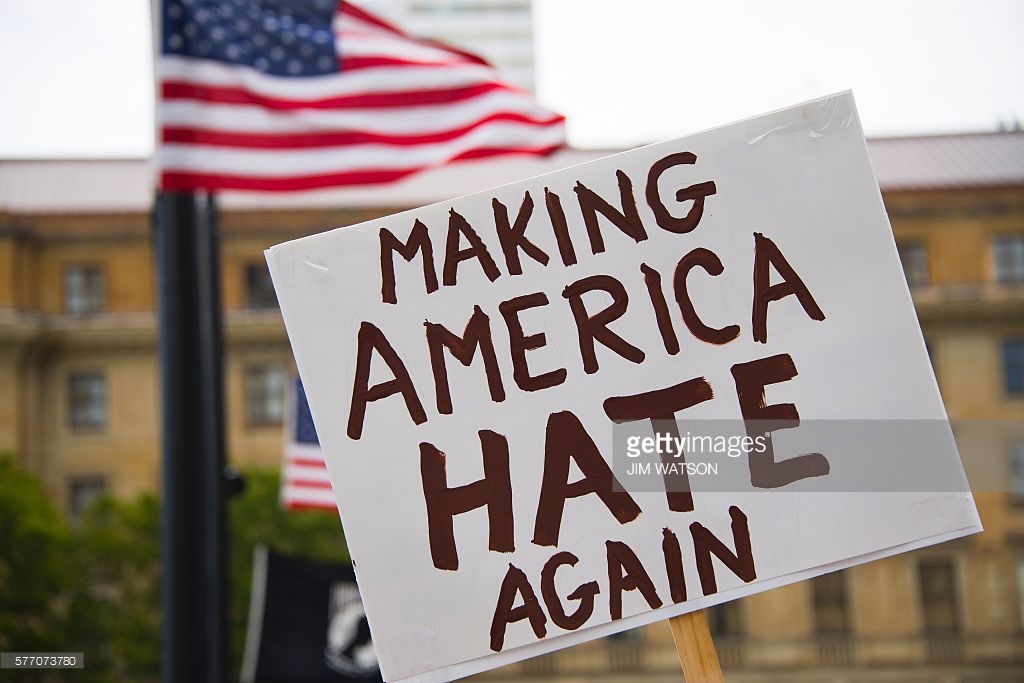 It is no wonder that they opened their arms in embrace to Trump and his rantings because he attacked the people who they feel are taking their power away – not black Americans alone but black and brown immigrants.

All immigrants – not just those they claim fallaciously are “Pouring over the border like thieves in the night!”

They hide behind the smoke screen of upholding laws, protecting the border and keeping out the “illegals” but the reality is that the hate is palpable for all black and brown immigrants – legal or not – because they are leading to the darkening of America. If these undocumented immigrants were mostly White then it would be a different story all together.

We have seen that played out over and over again. Last week in Wisconsin, a student studying legally in this country but born in Saudi Arabia, was attacked without provocation and beaten so badly by a group of White men that he died the next day. What did this immigrant student do? He did not sneak over the border – no he was here legally on a US student visa. He is believed to have been targeted and attacked because of the way he looked – foreign, black and Muslim.

All of the groups that Trump riled up his ignorant base to see as threats to their vision of a “Great America.”

The 2016 Presidential campaign of Donald Trump has proven that even if all the undocumented immigrants are deported from America, immigrants and their descendants in this country will still face hatred simply because of the color of their skin; their accent, their culture, or the way they look.

And that’s a FACT!

So to those immigrants who voted for Trump and who like to claim they were born here or came legally and did “the right thing” unlike the undocumented migrants – think again! Because at the end of the day you are immigrant and to the growing number of people seeing nothing but WHITE in this country right now, that makes you just as guilty as if you were “illegal.”

The writer is CMO of Hard Beat Communications, Inc.