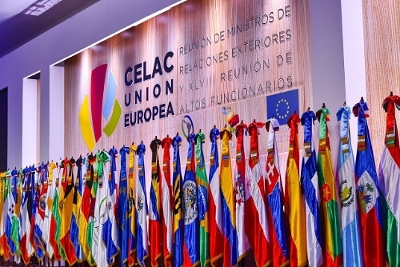 SANTO DOMINGO, Dominican Republic, Oct. 25, 2016 /PRNewswire/ — Dominican Republic has become the capital of transatlantic diplomacy today with the reception of more than 30 ministers and 59 delegations of countries participating at the first meeting of Foreign Ministers and Senior Officials of the Community of Latin American and Caribbean States (CELAC) and the European Union states, event that will be held until Wednesday.

Federica Mogherini, Vice President and High Representative of the European Union for Foreign Affairs and Security will accompany the Minister of Foreign Affairs, Miguel Vargas Maldonado, in the development of the CELAC-UE meetings in the Caribbean nation.

The Minister from the Dominican Republic, motivated his counterparts from the Community of Latin American and Caribbean-European Union to participate actively in the dialogues, exhorting that the decisions taken should be based on consensus among participants, putting the general interest of bi-regional community first.

“We are at a critical point, where we are committed to ensure that the European CELAC-EU forum fulfills its transcendental purpose that has arisen facing common global challenges.”

“Therefore, I appeal to you all, so that your efforts are oriented towards consensus, under a constructive spirit, aimed at reconciling positions, putting aside what separates us, focusing on the goals that unite us”, added chancellor Vargas, as he welcomes the start of the of conclave discussions with a meeting of Senior Officials of the CELAC-EU.

Delegations led by deputy ministers and officials have arrived in Santo Domingo to join technical meetings, whose first and preliminary sessions initiated Sunday afternoon at the Foreign Relations Convention Center.

Several sessions of this kind will take place until tomorrow Tuesday afternoon, when the formal meeting of the Foreign Ministers will initiate with an opening ceremony led by Minister of Foreign Affairs of the Dominican Republic, Miguel Vargas and Vice President / High Representative of the European Union Affairs Foreign and Security Federica Mogherini, with the presence of the Dominican President Danilo Medina.

Foreign Minister Miguel Vargas pointed out that in accordance with the commitment made by the Dominican Republic as a country holding the Presidency Pro Tempore of CELAC, the Ministry has deployed all the arrangements and requirements for this encounter between Latin American, European, and Caribbean partners, stemming that the meetings be held auspiciously, with the will of strengthening the bi-regional dialogue for the benefit of our peoples and nations.

The Foreign Ministry has worked with effort and dedication to uphold the image of the country and further strengthen the regional leadership of the Dominican Republic.

TOURISTS TO VISIT CULTURAL CENTER OF HAITI DURING JACMEL GETAWAY IN MAY 2015...

Fla. Democrat on Immigration Reform: ‘Where Are You Going to Get People to …...

Golf-Bogeys not bouquets for Miss Indonesia in Jakarta

Gordon Ramsay Cooks Up A Hash In Guyana’s Jungle