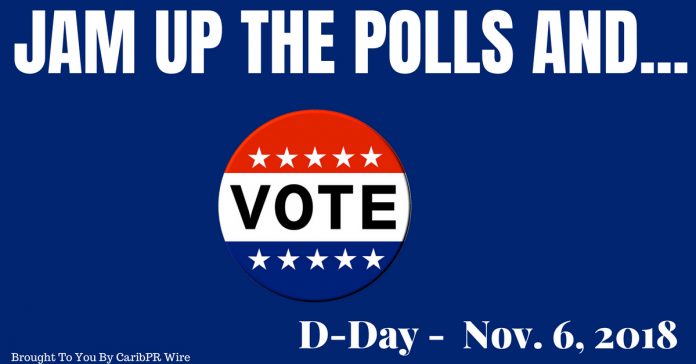 News Americas, NEW YORK, NY, Fri. Oct. 5, 2018: With 32 days until the November 6, 2018 mid-term election in the U.S. from today, Oct. 5, 2018, CaribPR Wire’s original voter education message to the growing Caribbean-born immigrant voting bloc in the US is catching on.

The message, which taps into the carnival and party culture of the burgeoning Caribbean immigrant population across the US, is picking up interest. So far, it’s been featured in several news outlets including the New York Daily News, the Caribbean Life and South Florida Caribbean news and on Groovin Radio and Diaspora Dialog.

The promotion is the brain-child of CaribPR Wire founder, Felicia J. Persaud, to stimulate and drum-up voter turn-out among Caribbean immigrant voters in the U.S. this November, especially as the Donald Trump administration steps up its attack on immigrants and continues to slam the doors shut on immigration, including legal.

According to the recent U.S. Census’s American Community Survey, the Caribbean immigrant population in the US has grown by a projected 600,000 in recent years to surpass a conservative estimate of 3 million nationally. Over 50 percent are reported to be naturalized citizens, making them eligible to vote.

“This is the most critical election of our life-time as immigrants in this country, especially given the anti-immigrant policies being put in place by this administration,” said the Guyana-born, U.S. citizen and media entrepreneur. “This Miami Carnival it is important to party with a purpose by liming, wining and then voting come Nov. 6, 2018 or our carnival, mas and ‘lime’ time in these United States could be history.”

The campaign was conceptualized and created by award-winning digital media company, Hard Beat Communications and is aimed at keeping the beat of carnival going into the polls this November 6th.

The messages can accessed on CaribPR’s Facebook page here.