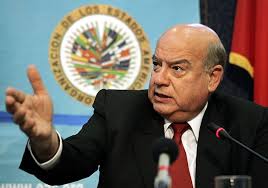 News Americas, WASHINGTON, D.C., Mon. June 16, 2014: The Secretary General of the Organization of American States (OAS), José Miguel Insulza, personally congratulated President Juan Manuel Santos of Colombia for his re-election with the absolute majority of the votes cast, which gave him a decisive popular mandate.

The leader of the hemispheric Organization wished President Santos success in his second constitutional term, and reiterated the disposition of the OAS to continue its support for the strengthening of Colombian democracy and, in particular, the peace process in the country.

“The election in Colombia has resulted in a clear winner. The timely delivery of the definitive results and their immediate recognition by candidate Oscar Iván Zuluaga, evidence an exemplary democratic exercise,” said Secretary General Insulza. “We hope that the Colombian people, the true protagonists of this civic exercise, now that the electoral process is concluded, will once again join in the great tasks that were the central issue of this campaign,” he added.

The OAS leader said “the international community looks with hope upon the negotiations for a lasting peace in Colombia, which have no doubt been strengthened today. We hope they conclude soon, as does the entire country, which has once again shown its desire for peace and its democratic disposition.”

Finally, Secretary General Insulza congratulated the Electoral Observation Mission headed by the former President of Costa Rica José María Figueres in both the first and second rounds, for its excellent work.