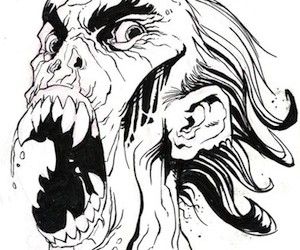 Although it was scary but not quite like this image above.

For the first time ever, I am going to delve into dream interpretation, and probably the only time, based on my own vivid dream the other night.

Afterwards I will explain my good luck it did not turn into a NIGHTMARE.

Call it my “encounter with Barack.” Here was the fairly brief dream.

I am startled and he turns around walks over to me and we sit in another part of the room next to someone working at a computer his back to us ..

I ask Barack Obama why are you here? He tells me he needed a job after being President and this law office hired him.

I say but you were President why would you need a low level job like this?

He tells me he looked around and it was all he could find; that it’s tough finding a good job in this economy.

At the same time I’m trying to get the attention of the guy at the computer telling him do you know who this is? He was President of the United States

But he ignores me uninterested. Still I keep trying …

I say to Obama tell him you are only one of about 35 people who have ever been President. ..

That is when I woke up.

Now here is my ‘expert’ interpretation.

First of all my subconscious clearly views Barack Obama as an EX-President. Or if you prefer X-President, which has two meanings: 1) that even though he is still President, in fact he has become meaningless, or 2) that I have already moved beyond Obama as President and am looking past him.

Both are good signs of a healthy positive dream here in Obama’s America.

What about the setting where the dream took place?

At the start I am walking through an office building having no idea where I am or what I am looking for. This is a clear sign Obama has quickly faded from view once his Presidency is over.  It is obviously insignificant – Barack Obama has his office in this building or everyone including me would know that if anyone cared but they don’t. That is why I have no idea where I am.

At the same time, needless to say, I was in fact searching for X President Barack Obama but he had quickly become so invisible I was having a hard time finding him. Otherwise why would wandering around in this building?

That fact is, when I randomly opened an office door after wandering around and with no name on it to try and find out where I am, that is when to my surprise, I notice Barack Obama sitting in a  corner almost invisible and looking away from everyone else facing a window.

It is like Obama does not want anyone to find him that he is hiding. I interpret that as Obama hiding from his own Presidency hiding from his dismal record during his two terms as President.

Barack Obama, former President of the United States, does not even have his own office. He is sharing a room with others who ignore him like some fairly low level clerk of no special importance. More obvious meaning.

The riches he expected to reap after becoming President did not materialize. Even his dream Presidential library which this may be is just one room in an anonymous office building. Meaning just as with the other aspects of the dream there was so little to the Obama Presidency there is no purpose to a huge Presidential library to keep records of all his great deeds. Here are few if any and thy can all fit in one room he shares with other individuals.

The next point of the dream and this is pivotal …

Obama notices me the moment I enter the room …

Less likely it is because I met him twice when he was still a lowly little know Illinois State Senator and we had a conversation in New York City. Or even earlier he recognized we both had lived on the same block in Brooklyn although as far as I know we never met.

There are other more speculative reasons why Obama recognizes me in my dream but I will resist exploring those here. It would be wild speculation.

So Barack then invites me to sit in a different part of the room with him. Next to us is someone facing a computer and I do not see their face. So they represent “everyone else” in my dream.

I tell Obama I am astonished he is working in this place and does not even have his own office. He tells me he tried but this is the best job he could get.

My dream interpretation of this part has two components, 1) again that nobody cares about Obama now that he is no longer President, but far more 2) that he is a victim of his own lies while President bragging how good the economy was. Of course he never mentioned the lack of good jobs for most Americans that they had to take jobs they did not really want just as Barack Obama is forced to do the same himself in my dream !

Now to the dramatic conclusion ….

I repeatedly try to get the attention of the anonymous American sitting at the computer who will not turn around. I keep trying to tell him don’t you realize the person I am speaking with was President of the United States.

But the individual just keeping working on the computer.

I turn to Barack in frustration and ask him rhetorically to tell this individual with his back turned to Obama he is only one of about 35 Americans who have ever been President in all of America history. No response!

That is when I woke up.

It was a good thing too because I was worried Michelle might show up.

That would have been a nightmare.

Thank God she did not.

The Dilemma Of Being Poor, Black And Haitian

Treviño was driven to make a difference – San Antonio Express