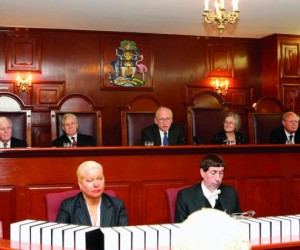 News Americas, CHARLESTOWN, Nevis, Fri. Feb. 13, 2015: Registered voters in the Federation of St. Kitts/Nevis must vote in Monday’s elections on the electoral boundaries that existed prior to January 16th,  the UK-based Judicial Committee of the Privy Council ruled Thursday.

They agreed with the lawyers for Mark ‘The Sherriff’ Brantley, deputy premier of the ruling Concerned Citizens Movement (CCM) of Nevis and opposition MP in the federal parliament; Dr. Timothy Harris and Sam Condor of the Peoples Labor Party (PLP) and Shawn Richards of the Peoples Action Movement (PAM), that federal elections should be held on the old constituency boundaries and not on those declared by the islands’ Governor- General, Sir Edmund Lawrence by Proclamation, on January 16th.

The entire case surrounds the decision by the government to call an emergency sitting of the Parliament on at around 4:15 PM on Friday January 16th and just moments after the Constituency Boundaries Commission voted and approved new constituency boundaries.

A Proclamation was hastily put before Speaker Curtis Martin in the National Assembly, approved by the government benches, signed by the Governor General Sir Edmund Lawrence and allegedly published in the Official Gazette in a matter of hours without any debate in the House, the opposition had argued.

A Proclamation for the Dissolution of Parliament was then signed at 6.20 pm by Sir Edmund and read from the steps of Government Headquarters, on Church Street, by Prime Minister Douglas.

The opposition then took their case to the Eastern Caribbean Appeals Court which upheld the order of Justice Carter. But on Thursday, the Privy Council, ruled that the “The Board will humbly advise Her Majesty that the Appeal should be allowed. That the Orders made by Madame Justice Marlene Carter on the 27th January 2015 be restored.”

Peter Knox QC and Douglas Mendes SC represented the opposition at the Council while Lord Goldsmith, a former UK attorney general, represented the St. Kitts government. The Privy Council still represents the highest appellate court for many Caribbean nations, despite the formation of the Caribbean Court of Justice.

The opposition parties welcomed the win Thursday with CCM’s Mark Brantley telling supporters Thursday night that the rule of law had prevailed and God had intervened to save the country from the hands of “a dictator.”

Prime Minister Douglas for his part slammed the decision as a failure “to take into account the democratic will and the sentiments of the people” ahead of a public rally in Nevis Thursday night.

“We in Labour feel there is a real gulf of misunderstanding between what has gone on in a court room in London and the mood of the ordinary man and woman on the streets here in St. Kitts and Nevis,” said Prime Minister Douglas in a radio and television Thursday afternoon.

The election in St. Kitts Nevis will see the opposition coalition under the banner Team Unity – made up of the long-time opposition party, PAM, the PLP and the CCM, contesting Monday’s elections against the St. Kitts Labor Party government and the Nevis Reformation Party (NRP).

Across the islands’, the signs of an election are hard to miss.

It’s everywhere – on candidates promotional posters placed on lamp posts, on vehicles that carry party slogans or flags proudly, on television and on radio. Even the school children are in the mix, proudly .showcasing party promotional items like rags and flags while their parents are decked out in their party colors.

In these islands’ where sugar was once king and tourism has taken its place, tThe heated election time politics is palpable with nationals in small shops and corner restaurants becoming political pundits and talk-show hosts as the dialogue invariably turns to the upcoming elections.

Some passionately make the case for a change in government while others say the incumbent is doing a good job and they simply can’t trust the country to anyone else.

Regardless of sides, one thing is clear – politics and passions run as deep as the colors flaunted – whether red for Labor, yellow for PAM, orange for the PLP, Blue for the CCM or green for the NRP.

Here it’s clear party colors mean something as real as the Caribbean Sea that surrounds the beautiful islands.

The trio of parties – Team Unity – says the collaboration itself is historic and they have come together to “save the next generation from the dictatorial and corrupt policies of the Denzil Douglas administration.”

At public rallies, night after night, party leaders for the opposition side insist the constitutional rights of Kittians and Nevisians are being trampled upon by the prime minister, who they say has dubbed himself “10 man in one.”

They say the country’s sitting prime minister went too far when he hijacked the parliament on January 16th and pushed through a bill to change the country’s electoral boundaries while refusing legislative debate on the issue.

But for his part, the 20-year incumbent, Prime Minister Douglas, remains optimistic that he can win another five year term, which will make him the longest serving prime minister in the Caribbean.

His party has vibrantly showcased its red colors across the island and a collaboration with the opposition Nevis Reformation Party on the island of Nevis has seen a boost in their branding too.

And the party has turned to Jamaican singers like Cecile and Anthony B to pull crowds to their rallies and made a splash with motorcades and promotional items ahead of Monday’s elections.

PM Douglas himself attends the rallies too, using the platform to dismiss the challenge being mounted by the opposition coalition. He has said  Team Unity is not even a party; that coalitions fail and the challengers are simply trying “to fool” voters and to “bamboozle” their minds.

The Prime Minister insists his government has put the country on a path of “economic growth and development” and St. Kitts/Nevis “is a gem in the region.”

“This country under Labour has progressed and produced meaningful change. St Kitts and Nevis remains the number one country in the entire Caribbean,” the Prime Minister has boasted.

The government points to several major projects completed in the country through public and private sector partnerships including Kittian Hill, a private jet terminal and lounge at the airport, Christophe Harbor and the soon to be opened Park Hyatt Hotel. It is a place that is on the move, much to the envy of the entire Caribbean.

But the opposition argue that the economic progress touted by the government only benefits a few, including those who have bought passports from the administration.

Most nationals they say are fraught with worry over crime and jobs and are forced to shell out 17 percent in high taxes for basic food items such as water, eggs and bread which sells for EC$5, EC$12 and EC$6, respectively.

On Nevis, the ruling CCM party’s Premier, Vance Armory, says the island does not see a dime in federal support, simply because “it won’t bend to the dictates of Douglas.”

They also argue that the government’s Citizenship for Investment Program has essentially led to a wholesale selling of the birth rights of  nationals’ born in St. Kitts and Nevis to foreigners who can shell out US$250,000 or more and put the entire nation at risk.

They point to the incident in Canada of Iranian Alizeera Moghadhan, who reportedly told officials in Canada that he paid $1 million for a St Kitts and Nevis diplomatic passport. Ever since, Canada has implemented a visa requirement on St. Kitts and Nevis due to concerns about the issuance of passports and identity management practices within its CIP that funds the privately run Sugar Industry Diversification Foundation. And they point to the The Financial Crimes Enforcement Network (FinCEN)  which was warned “financial institutions that certain foreign individuals are abusing the Citizenship-by-Investment program sponsored by the Federation of St. Kitts and Nevis (SKN) to obtain SKN passports for the purpose of engaging in illicit financial activity.”

The Douglas administration has said it has since issued an immediate recall of all SKN e-passports issued without the critical information and/or name changes issued between January 2012 and July 2014. He says the opposition parties are simply “economic terrorists looking to mash up the SIDF.”

The country’s Supervisor of Elections, Wingrove George, has said 123 polling stations will be open on Monday across the Federation from 7 a.m. to 6 p.m. Ninety of them will be in St. Kitts and 33 in Nevis.

Observers from the Organization of American States have been invited to monitor the elections.

The counting of the ballots is expected to commence at 8:00 PM in the evening of polling day and results expected to be carried live on local radio and television.