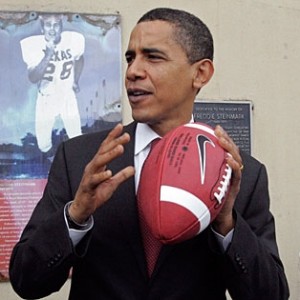 Making this episode of Obama’s America about linking Obama to the new revelations about the corruption of the New England Patriots. But wait to you read until you make a judgment.

To begin with the fact that President Obama decided to choose a sports venue for his announcement Friday at the very time the NFL report about the Patriots deflating football was released is all the justification required.

Let me quote from an article in Thursday’s New York Times to make my point, titled “Obama Chooses Nike Headquarters to Make His Pitch on Trade.” Obama had no real reason to do so except SPORTS is such a popular theme to wrap himself in for any reason.

“It came as a shock to labor activists, and a surprise even to some in his own administration, that President Obama chose to make his stand in the current fight for trade negotiating power at Nike headquarters in Oregon, ground zero in the American war over free trade.”

“During years of debate about the costs and benefits of trade, few businesses came to symbolize the dark side of international commerce more than Nike the multibillion-dollar apparel giant with armies of low-paid factory workers in Asia stitching together Air Jordans.”

So Obama is courting controversy going to Nike headquarters in Beaverton, Oregon to make an announcement about a free trade agreement that has lots of critics but he has decided using SPORTS to highlight his position as the best way and place to counter his critics. By the way there is also an unstated background issue here I am proud ONLY Obama’s America can take credit for exposing. A trip on Friday to the West Coast on Air Force One. Did someone say weekend Presidential GOLF? Not sure but probably.

Anyway to the real topic this week having set the stage for my logic.

Corruption in sports and the NFL and Obama’s silence.

One more good example of how much Barack Obama FAILS as a Leader.

Yes, we really could have a President who would have spoken out forcefully about the latest revelations about Tom Brady and the New England Patriots deflating footballs to gain themselves an illegal advantage but we do not have that President in Barack Obama.

You already know the basic story. At halftime at last season’s AFC Championship game against the Indianapolis Colts to decide who would go to the Super Bowl, officials discovered all but one of the Patriots footballs had been deflated to give QB Brady and the Patriots an advantage. Note for the record ONE football was not that cud be pulled out if necessary.

NFL Commissioner Goodell to much well justified criticism stonewalled any investigation until long after the Super Bowl so as not to interfere with the biggest money making event in sports. That in itself made the corruption  that much more blatant. Of course Obama said nothing.

Which brings us to yesterday when the NFL FINALLY released its long delayed official “independent” investigation of  Deflate Gate.

Here is The New York Times on the report …

“The results of a nearly four-month investigation stated that “it is more probable than not” that New England Patriots personnel intentionally deflated footballs to gain an advantage against the Indianapolis Colts in the A.F.C. championship game in January, and that Tom Brady, the Super Bowl’s most valuable player, was probably aware of it.”

The scandal regarding the deflated footballs is more alive than ever because of the release of the report proving Brady and the Patriots did it purposely..

It is an existential crisis for the NFL. As big as the concussion issue.

NO the NFL will not disappear. The meaning of an “existential” crisis is that it brings into question the very foundation of an institution. The impact is insidious and will be long lasting. It gives fans another powerful reason not to be wedded to football so tightly and be it unconsciously SEARCH for alternative sports for their passion.

It is also will be an incident that will NEVER go away. It is now a part of the “legend” (sic) of the NFL. It will rear its ugly head again and again in different context and each time it does the NFL will take another hit.

And although the NFL refuses to dig deeper HIDING behind the phrasing  “it is more probable than not” the fact is not only Brady but the team’s vaunted head coach Bill Belichick and others in the organization had to be complicit in this scandal and/or have been involved in the cover up. Did somebody just say COVER UP. . And the report BEGS the question is the NFL going to now come to a final determination and then hand out SEVERE penalties? NO .. and more scandal as a result !

The Patriots should be striped of their 2015 Super Bowl title ! The NFL knew well had this report been released BEFORE the Super Bowl that game would never have been played as a result. The NFL would have to have declared that the Patriots forfeited the right to play for the Super Bowl and the Seahawks would have been awarded the Championship. EXCEPT that would have cost the NFL too much money and credibility.

That is sure how it looks here in Obama’s America.

The most obvious question of all right now is how long have the Patriots been doing this and in how many games over how many seasons. And what will be the implications of a real investigation uncovering a pattern of ball manipulation. We would have a crisis that will rock the NFL to its very foundation and in fact become a criminal investigation of “game fixing.”

So what will Obama say? Nothing again.

Even thought this is as much about the very structure of the NFL under Commissioner Roger Goodell as it is about the New England Patriots. The Patriots will never admit wrong doing. It is up to and the responsibility of the league to fully investigate but they will not as they have not with the current report because it will expose the corrupt underbelly of the NFL that this team would go so far as to purposely under inflate footballs looking for any possible illegal advantage it can get away with.

Let me say it again it is virtually beyond belief Brady and the Patriots chose only this one game to deflate footballs. Far more likely it has been a frequent practice over many season. Such a pattern would qualify under law as “game fixing” a criminal offense. A pattern of game fixing a CRIMINAL offense.

Any such determination would be staggering. Potentially a large number of Patriot officials and players could be caught up in that scandal. Likewise Commissioner Goodell and any other league officials could also fall for creating an environment in which “game fixing” could take place without any means for the NFL to detect it or any interest in doing so.

Place deflating football by the Patriot in this wider context and it certainly is something the President of the United States should be commenting on NOW because of these implications which undermines the fundamental integrity in our society of a very significant institution professional football.

What’s that nobody is getting all that upset why should the President?

LEADERSHIP more than anything else is the job of the President.

As much as we rarely see REAL leadership from our Presidents.

And surely not from President Obama.

Instead we get is the carefully orchestrated appearance of leadership.

Just like we will at Nike headquarters in Beaverton on Friday.

Which is NO leadership at all. Just smoke & mirrors Obama style.

How To Empower Women Founders In Low-Income Countries

Mexico’s Annual “Tianguis Turistico” is being held in Cancun, from May 6 to 9...