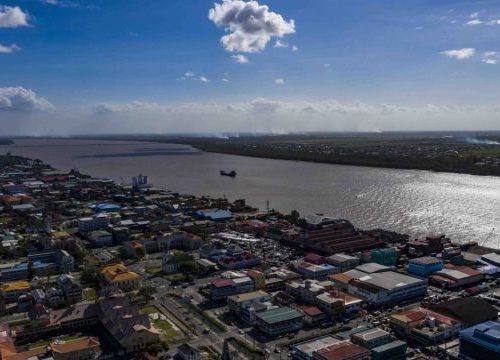 News Americas, NEW YORK, NY, Tues. June 14, 2022: Guyana’s GDP per capita is expected to increase from US$6,953 per capita in 2020 to US$15,153 per capita in 2023. Based on the available data, the country could become the world’s largest oil producer in per capita terms by 2030. The challenge for the country is to have the benefits of this bounty equitably distributed throughout the society, including the hinterland and rural areas. My recent study “Gas to Power and Implications for Economic Diversification in Guyana” examined how Guyana can seize this moment to do exactly that.

Guyana is following an overall low carbon development plan and the Gas to power project can be an essential bridge to a low carbon future since natural gas would replace more polluting hydrocarbons such as diesel and heavy fuel oil while the country invests in and develops its significant renewable energy potential in hydropower, wind power, ocean power, and solar power.

The Gas to power project could alleviate many worrying statistics that plague Guyana’s electricity supply and retarded its economic development. These include the most power outages in the Caribbean (on average 8 per month).  Importantly, Gas to power could reduce the cost of electricity from US$0.25/0.36 per kWh to US$0.06/0.07 per kWh and open the possibility to engage in several economic endeavors.

The Gas to power project is expected to support diversification and a competitive economy. Investment in Gas to power generation would lower electricity prices and foster development in new industries and sectors. The latent demand for electricity could finally be satisfied. The project also presents opportunities for investment and expansion in manufacturing, particularly in agro-processing and new products. This would support broad-based job creation and inclusive growth.

The experiences of Ghana (a new entrant to the oil and gas industry), Trinidad and Tobago and Venezuela point to some critical mistakes that Guyana must strive to avoid. High up on that list of mistakes to be avoided is the dreaded “Dutch Disease Effects” where the high rents from the oil and gas sector undermine the viability of other sectors through high wages and labour availability, in effect causing the real effective exchange rate to appreciate. A usual casualty in such a scenario is agriculture which becomes unattractive and leads to a high import food bill. However, by lowering the cost of electricity, the Gas to power project could provide an excellent counterbalance to potential Dutch Disease effects.

Another important policy consideration for the government of Guyana is to establish a governance infrastructure for the oil and gas sector that is transparent, efficient and accountable.

Some critical pieces of legislation, such as the creation of a sovereign wealth fund and legislation to encourage greater local content in the oil and gas industry are already in place but there remains more to be done to ensure that these are implemented smartly and sustainably.

The study provides six main recommendations. First, adequate grid infrastructure, policy, and legislative changes are required to ensure that all Guyanese benefit from the Gas to power project. Secondly, a thorough feasibility study is required to avoid gas oversupply. Third, Gas to power should be considered as a bridge to a low carbon future while renewable energy is developed. Fourth, Gas to power must directly or indirectly benefit the most deprived populations living in the hinterland and rural communities. Fifth, Gas to power, including ancillary services and latent economic activity, should be compatible with the government’s local content legislation. Finally, any adverse environmental and social implications from the project should be mitigated as far as possible.

This is not the end of the conversation, but the beginning. As policy makers, the private sector, civil society, the general public, and anyone interested in the sustainable development of Guyana look to take advantage of this extraordinary opportunity, it is critical that they take these recommendations into account to maximize the benefits felt by every citizen of Guyana.

EDITOR’S NOTE: Dr. Justin Ram is an international economist with over twenty-five years of international experience in practice, research, development and management. He was previously Director of the Economics Department at the Caribbean Development Bank (CDB) and a member of the Bank’s management team. He holds a PhD from the London School of Economics, an M.Sc. in Economics from University College, London, and a B.Sc. in Economics from The University of the West Indies