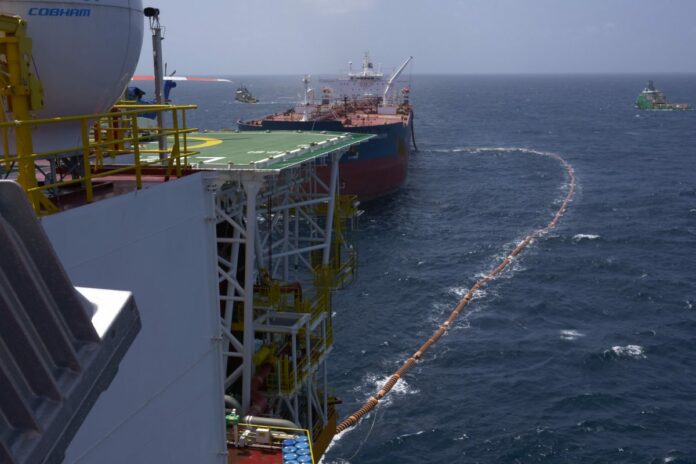 News Americas, WASHINGTON, D.C., Fri. Dec. 11, 2020:  The Guyana Environmental Protection Agency, (EPA), was recently able to push back on the oil companies to improve the Stabroek Block agreement which was originally signed in 2016.

Those improvements have centered around protecting Guyana from the devastation of oil blanketing our shores and those of our neighbors. The Stabroek Block is Guyana’s golden goose with its 9 billion barrels of oil. Has the government inquired with Exxon about improving the financial terms of the Stabroek Block oil contract?

In an interview last week, Dr Vincent Adams, former head of Guyana’s EPA, mentioned that the EPA was able to convince Exxon that it was their responsibility to have unlimited insurance liability to cover damages from an oil spill.

The oil spill that occurred in the Gulf of Mexico, about 10 years ago, cost BP US$70 billion. Guyana signed the Stabroek Contract with shell companies located in the Caribbean not their more financially capable parents.

Hence, if there were a major oil spill, without the new agreement in place, it would have bankrupt Guyana. The shell companies lack the resources to handle a major spill. Dr Adams and his team acted in the best interest of Guyana by working with and convincing Exxon to amend the terms associated with the Stabroek Block to protect Guyana. Dr Adams noted in the interview that Exxon will consider reasonable requests if asked.

In 2017, the media reported that Exxon had estimated that Guyana could get revenues of US$7 billion from Liza 1. Now, we would be lucky if we receive half that amount from Liza 1. Last week, it was reported that Exxon’s expectation for oil prices over the next 5 years to be in the range of US$50 per barrel. Liza 1 contains about 450 million barrels of oil. If we use a price of US$50/barrel, it would mean that Liza 1 is projected to produce revenues of US$22.5 billion.

What should be our fair share of Liza 1 projected revenues of US$22.5 billion?

If we use the terms from Suriname’s oil contract for comparison, their government take is approximately 36% of oil revenues, that works out to about US$8.1 billion. If we recall, the Stabroek Block expenses are capped at 75%.

But because of a lack of ring fencing, which ensures oil well expenses don’t spill over to other wells, we may never see the expenses for Liza 1 fall below 75%. The reason why is that Liza 1, Liza 2 and Payara have infrastructure expenses totaling US$18.5 billion. Seventy five percent of US$22.5 billion is approximately US$16.9 billion, which is less than the US$18.5 billion expenses.  Thus, Liza 1 won’t be able to payoff the debt that has accumulated, as part of capital costs, for the Stabroek block. Thus, the maximum we could get from Liza 1 is about 14.5%. In dollar terms that is US$3.3 billion.

Two of the major oil companies operating in the Stabroek Block, Exxon and Hess, are based in America. A country that pulled out of the Paris Agreement this year after signing it in 2016. In 2018, the Americans renegotiated the North American Free Trade Agreement (NAFTA), established in 1994, after the United States determined the deal was unfair to its citizens. Was sanctity of contract ever brought up in these cases or is it only whipped out on us by American oil companies?

Didn’t the oil companies already set a precedent that the terms of the original Stabroek agreement can be changed by agreeing to unlimited insurance liability?  Did the present or previous governments ever engage Exxon and its partners to act in the best interests of Guyanese people to request a fair financial deal for the Stabroek Block?

Can Medical Cannabis Save The Barbados Economy?

Opinion: ‘The Iranians Are Coming’: The Imagined, ‘Sinister’ Iranian Threat in … – Tripoli...