Home Commentary What Comes After High Oil Prices For Guyana? 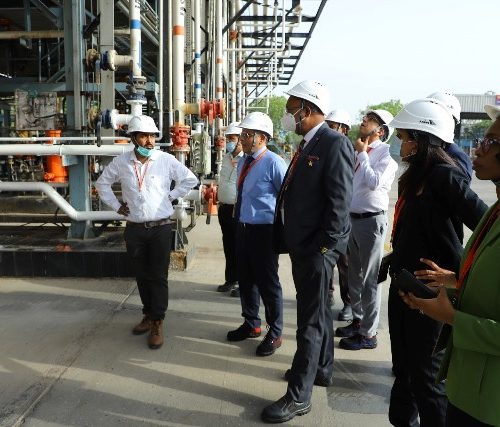 By Scott B. MacDonald

News Americas, WASHINGTON, D.C., Sat. July 16, 2022: The Russia-Ukrainian War came as a surprise blow to the global economy, with the shock waves rippling outwards from Eastern Europe and the Black Sea and reaching as far as the Caribbean. It has left much of the Caribbean grappling with higher food, energy and transportation costs. In contrast, Guyana is enjoying more favorable economic winds. According to the Bank of Guyana, real GDP growth is now forecast at over 50 percent for the year. But the disruption from the war threatens recession in many advanced economies while the Chinese economy is also cooling. How prepared is Guyana for a potential global economic slowdown, which may have a diminished appetite for oil?

In 2021, the global economy made a considerable rebound from the Covid-19 pandemic. According to the International Monetary Fund, the global economy contracted by 3.1 percent in 2020, but posted a strong 6.1 percent rebound in 2021. In October 2021 the IMF’s economic outlook remained upbeat, looking at 4.9 percent expansion in 2022. Then came the Russo-Ukrainian War and the disruption of food and energy supply chains. The IMF’s global growth projection is now considerably lower at 3.6 percent for both 2022 and 2023. It could go lower.

In the Caribbean the volatility in the global economy has made an already precarious economic situation even more so. In contrast, Guyana is well-positioned to ride through the turbulence. It occupies a position in the Caribbean shared only with Trinidad and Tobago (rich in natural gas and urea) and Suriname (which has the potential to become a major oil producer). Guyana produces around 350,000 barrels per day and has the third largest reserves in Latin America and the Caribbean and the 17th largest in the world. The rush to develop these resources began around 2015 and has accelerated since then, with Exxon Mobil and other major multinational energy companies playing a major role.

In 2022, Guyana is enjoying a fiscal windfall from oil revenues, rising foreign exchange reserves (heading toward $700 million), and moderately expanding activity in non-oil sectors, such as agriculture, gold and bauxite mining and manufacturing. Equally important, Guyana’s sovereign wealth fund, the Natural Resource Fund (NRF), started in 2021, reached $644 million as of May 2022.

But the global energy regime is being radically restructured, with a sharp decoupling between Europe and Russia; the United States has stepped up as a major supplier of energy for Europe; and Middle Eastern oil and gas producers are under pressure to produce more, though Saudi Arabia and the United Arab Emirates (UAE) are concerned about loss of business in key markets such as China and India to cheaper Russian and Iranian oil. Around the planet, the restructuring of old energy relationships is driving up prices, with the knock-on effect of higher inflation and subsequent central banks interest rate hikes. In the United States, the Federal Reserve has assumed a very hawkish approach to tame inflation, which means that it could slam the brakes on economic growth.

Related to higher interest rates by the U.S. central bank is that such a development has usually been bad news for Emerging Markets as in the Caribbean and Latin America. Global investors have already pulled out $50 billion from emerging market bond funds this year (the worst outflow in 17 years according to the Financial Times). This indicates that there could be a lack of access to affordable capital for many countries, including most of the Caribbean and possibly Guyana.

Where does all of this leave Guyana? Although problems exist, the huge surge in economic expansion, a strengthening fiscal situation and relatively light debt load (estimated at 43 percent at year-end 2021), put Guyana on firmer ground than many of its neighbors. The current account balance of payments has been negative for several years due to the importation of capital equipment linked to the oil boom, but the expectation is that Guyana should start at some point in the medium term to generate surpluses. The country’s oil industry development is attracting the interest of foreign investors, including companies from China, Saudi Arabia and the United Arab Emirates to help develop infrastructure.

The challenge ahead is how to ride through more international energy price volatility and still take advantage of the opportunity to significantly upgrade infrastructure, industry, agricultural and education systems as outlined in President Irfaan Ali’s “One Guyana” plan. This means putting aside some of the revenue windfall into the NRF, keeping money available if the global economic slowdown is worse and longer than expected. Related to this is that tighter global capital conditions could make it more difficult for Guyanese companies and banks to raise capital.

Yet another challenge is Venezuela. While President Ali agreed at the July 2022 CARICOM leaders meeting in Suriname to ask the U.S. to remove sanctions on Venezuela to allow that country to supply (at a discount) oil to oil-dependent Caribbean countries through its Petro-Caribe facility, Venezuela’s return into international markets could help push down prices (though one has to wonder about how much the Latin American country can ramp up oil production considering the run-down condition of its facilities). It will also provide a government that has revived claims on two-thirds of Guyana a way to strengthen its economy and pose a greater risk.

Critical to the entire Guyanese experience of becoming a petro-state and rising through volatile international price swings will be the country’s ability to keep the social peace. It is no secret that tensions have existed between the Indo-Guyanese (who tend to vote for the ruling People’s Progressive Party) and Afro-Guyanese (who tend to vote for the opposition People’s National Congress and allied parties). The last elections were heated and disputed, leaving a degree of social tensions, which are not far from the surface.

Looking ahead, Guyana has done much to develop its energy sector, generally appears to have spent the revenues in a responsible manner (though greater transparency would help), and has put some of that money aside. The global economic downturn is not likely to be as bad as 2020, but it will test Guyana’s claims to being a regional energy leader and a core actor in the emerging Southern Caribbean energy complex which includes Suriname and Trinidad and Tobago. It will also point to Guyana’s ability to steer through another major test; how to manage its newfound oil wealth over the next several decades to construct an alternative energy system and a more inclusive social infrastructure.

EDITOR’S NOTE: Scott B. MacDonald, Ph.D. is the chief economist for Smith’s Research & Gradings, is fellow with the Caribbean Policy Consortium and a research fellow with Global Americans. His most recent book is ‘The New Cold War, China and the Caribbean,’ which will be out in August.