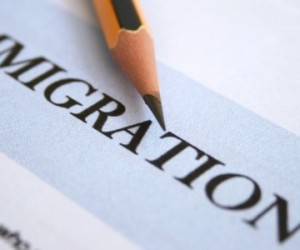 Dare non-criminal undocumented immigrants and immigrant advocates get their hopes up one more time?

Breitbart.com reports indicate that the U.S. Citizenship and Immigration Services has published a draft contract proposal to buy the card stock needed to make work permits and Permanent Resident Cards or green cards. The report speculates that this move means that USCIS is gearing up to move on processing more applications, as soon as you make your long overdue promised plans for executive actions on immigration reform a reality.

The USCIS proposal reportedly calls for the qualified contractor to provide material for at least 5 million cards a year with as many as 9 million “during the initial period … to support possible future immigration reform initiative requirements.” The contract also calls for as many 34 million cards over five years.

USCIS Director Leon Rodriguez for his part, told an audience at a Georgetown University Law Center conference on Tuesday, October 21st, that his agency was ready for whatever immigration changes you may announce.

However, while your White House spokesperson has deferred comments on the matter to the USCIS, the spokesman for that agency, Christopher Bentley, was quoted as saying the RFP is simply nothing more than a routine contract solicitation. But the increase in the contract numbers is heartening since USCIS now processes only around 3 million immigrants a year.

So where will the other millions come from?

Advocates and immigrants alike can only hope that after you twice delayed making any changes, the third time will be the charm and you will deliver on your promises soon after the mid-terms.

It is time Mr. President for you and the administration to authorize protection from deportation for immigrants, much as you did for young students with the Deferred Action For Childhood Arrivals (DACA). Your action can make work permits and travel documents available now to the millions trapped in the system, especially those with a petition that’s valid, but who have been caught up in waiting for a visa.

Just like with the new Haitian Family Reunification Parole Program (HFRP), where the US CIS will offer certain eligible Haitian beneficiaries of previously approved family-based immigrant visa petitions who are currently in Haiti, an opportunity to come to the United States about two years before their immigrant visa priority dates become current; undocumented immigrants living in the U.S. with petitions in the system from both relatives and employers deserve a similar chance to work and travel freely. Even those who can get a petitions filed within a certain time frame, much like with the 245 (i) program as implemented under former President Bill Clinton, deserve a chance.

Those with sibling sponsorship or those waiting for more than a decade for an employment sponsorship to become a reality, deserve your help now.  Not only will this help in a humanitarian way but it will contribute tremendously to the coffers of both the US CIS and the IRS in fees, fines and back taxes. It’s a win, win for all. Let’s make this happen please, as a holiday boon to your tired immigrant supporters.

Is Beto O’Rourke Right To Criticize Biden On Immigration?