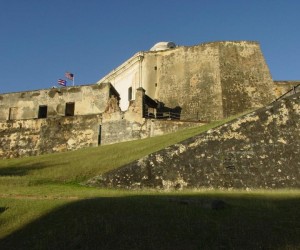 It’s the view from the street of Norzagaray in San Juan, Puerto Rico of the Spanish fort, The Castillo de San Cristóbal.

Castillo de San Cristóbal is the largest fortification built by the Spanish in the New World. When it was finished in 1783, it covered about 27 acres of land and basically wrapped around the city of San Juan. Entry to the city was sealed by San Cristóbal’s double gates. After close to one hundred years of relative peace in the area, part of the fortification (about a third) was demolished in 1897 to help ease the flow of traffic in and out of the walled city.

This fortress was built on a hill originally known as the Cerro de la Horca or the Cerro del Quemadero, which was changed to Cerro de San Cristóbal in celebration of the Spanish victories ejecting English and Dutch interlopers from the island of this name in the Lesser Antilles, then forming part of the insular territorial glacis of Puerto Rico.

American Exports: Edgar Castillo on his way out at Club Tijuana? Reports … –...

CARIBBEAN: 10 Things To Know About The Caribbean Roots Actress On The Empire