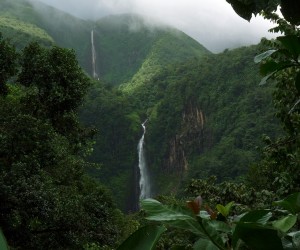 It’s the Carbet Falls in the lush rain forest of Guadeloupe. The slopes of the Soufrière volcano has formed the most spectacular waterfall in the Lesser Antilles. Christopher Columbus.  and his team discovered the island, heading towards the incredibly tall waterfall in the jungle covered mountains of this island, in November 4, 1493. The waterfall is one of most popular tourist attractions on the island. It has a total height of 245 m and has three steps with the tallest being 115 m high.

Staying Safe In The Caribbean

This Travel-Booking Website Loves It When You Call – Businessweek