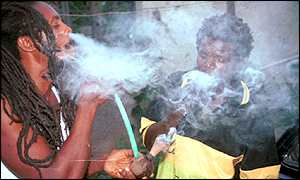 News Americas, KINGSTON, Jamaica, Thurs. Feb. 26, 2015: Members of the Rastafarian community across Jamaica can now burn “their herb” without fear of being arrested by the Jamaican police.

A new law passed through the country’s parliament decriminalizes the possession of small amounts of marijuana for religious, medicinal and therapeutic purposes, a move that will no doubt ease decades of tension between the government and especially the Rastafari community.

Many took to Twitter to celebrate, calling it a “special day for all Rastafarians in Jamaica.”

Legislators, however, stressed that there would be no “free-for-all in the growing, transporting, dealing or exporting of ganja.”

“[The law] eliminates an unnecessary source of friction between police and citizens, and ensures that our young people are not gratuitously shackled with criminal records,” said the country’s minister of national security Peter Bunting said on the Dangerous Drugs (Amendment) Bill which he piloted in the House. “This progressive legislation also begins to correct the victimisation of our Rastafarian brethren which started in colonial times and continued after independence.”

The Bill was passed with five amendments in the Senate on February 6, piloted by Minister of Justice Senator Mark Golding, under intense scrutiny from the Opposition, during a seven-hour debate. It then moved to the House of Representatives where the 2015 amendments were passed in the House of Representatives on Feb. 24th after a marathon debate seeing more than 12 contributions from both sides of the aisle, among other things, establishes a legal and formal framework from which a legitimate Cannabis (Ganja) Industry may be developed in Jamaica.

Bunting  added that the law “begins to correct decades of criminalizing tens of thousands of Jamaicans, mostly poor young black males, for possession of a little ‘spliff,’” a term for a joint prepared with cannabis and tobacco. The change means Jamaicans will be able to cultivate up to five marijuana plants on a single premises without facing arrest.Being caught in possession of up to two ounces of marijuana will become a petty offence that no longer results in a criminal record.

Tourists who are prescribed medical marijuana abroad will also be able to apply for permits allowing them to buy small amounts of Jamaican pot. Jamaica joins a growing number of countries around the world, including in Latin America, that have  moved towards decriminalization but is the first Caribbean nation to do so. Argentina, Colombia and Mexico have all decriminalized the possession of small amounts of pot. Guatemala has proposed legalizing the drug while Chile and Costa Rica have considered allowing medical marijuana use.